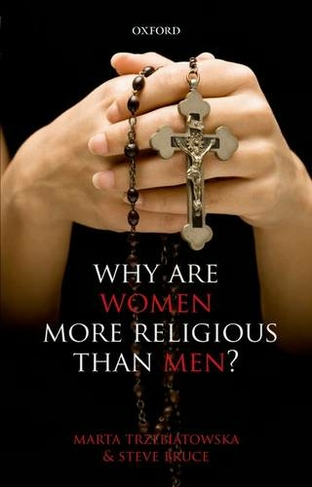 Why are Women more Religious than Men?

Women are more religious than men. Despite being excluded from leadership positions, in almost every culture and religious tradition, women are more likely than men to pray, to worship, and to claim that their faith is important to them. Women also dominate the world of 'New Age' spirituality and are far more superstitious than men. This book reviews the now sizeable body of social research to consider if the gender gap in religion is indeed universal. Marta Trzebiatowska and Steve Bruce extensively critique competing explanations of the differences found. They conclude that the gender gap is not the result of biology but is rather the consequence of important social differences over-lapping and reinforcing each other. Responsibility for managing birth, child-rearing and death, for example, and attitudes to the body, illness and health, each play a part. In the West, the gender gap is exaggerated because the social changes that undermined the plausibility of religion bore most heavily on men first. Where the lives of men and women become more similar, and where religious indifference grows, the gender gap gradually disappears. Written in an accessible style whilst drawing some robust conclusions, the book's main purpose is to serve as a state-of-the-art review for those interested in one of the largest differences between male and female behaviour.