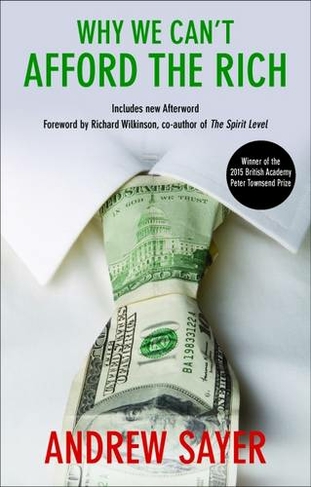 Why We Can't Afford the Rich

As inequalities widen and the effects of austerity deepen, in many countries the wealth of the rich has soared. Why we can't afford the rich exposes the unjust and dysfunctional mechanisms that allow the top 1% to siphon off wealth produced by others, through the control of property and money. Leading social scientist Andrew Sayer shows how the rich worldwide have increased their ability to create indebtedness and expand their political influence. Winner of the 2015 British Academy Peter Townsend Prize, this important book bursts the myth of the rich as specially talented wealth creators. It shows how the rich are threatening the planet by banking on unsustainable growth. The paperback includes a new Afterword updating developments in the last year and forcefully argues that the crises of economy and climate can only be resolved by radical change to make economies sustainable, fair and conducive to well-being for all.

Andrew Sayer is Professor of Social Theory and Political Economy at Lancaster University, UK. He has a long-standing interest in moral economy and has written several books on political economy, inequality, class, and philosophy and ethics, including Radical Political Economy: A Critique (Blackwell, 1995); The Moral Significance of Class (2005) and Why Things Matter to People: Social Science, Values and Ethical Life (2011) (both Cambridge University Press).