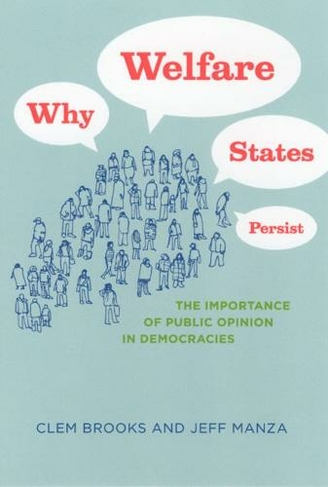 The world's richer democracies all provide such public benefits as pensions and health care, but why are some far more generous than others? And why, in the face of globalization and fiscal pressures, has the welfare state not been replaced by another model? Reconsidering the myriad issues raised by such pressing questions, Clem Brooks and Jeff Manza contend here that public opinion has been an important, yet neglected, factor in shaping welfare states in recent decades. Analyzing data on sixteen countries, Brooks and Manza find that the preferences of citizens profoundly influence the welfare policies of their governments and the behavior of politicians in office. Shaped by slow-moving forces such as social institutions and collective memories, these preferences have counteracted global pressures that many commentators assumed would lead to the welfare state's demise. Moreover, Brooks and Manza show that cross-national differences in popular support help explain why Scandinavian social democracies offer so much more than liberal democracies such as the United States and the United Kingdom. Significantly expanding our understanding of both public opinion and social policy in the world's most developed countries, this landmark study will be essential reading for scholars of political economy, public opinion, and democratic theory. 35 line drawings, 19 tables

Clem Brooks is the James H. Rudy Professor of Sociology at Indiana University Bloomington. Jeff Manza is professor of sociology at New York University. They are the coauthors of Social Cleavages and Political Change: Voter Alignments and U.S. Party Coalitions.