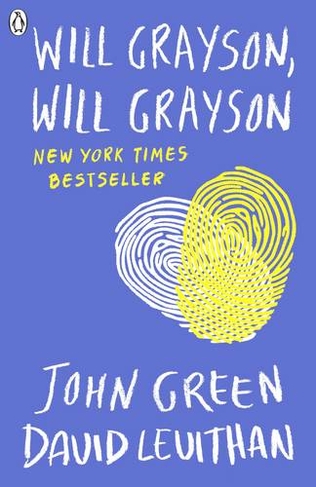 By John Green (Author), David Levithan (Author)
Paperback
https://www.whsmith.co.uk/products/will-grayson-will-grayson/john-green/david-levithan/paperback/9780141346113-12-000.html £6.55 rrp £7.99 Save £1.44 (18%)
GBP
Availability
In Stock
Free Delivery Available When You Spend £25 Or More
Details
Spend £25 On Products To Receive Free Standard Delivery To Your Home Or Free Next Working Day Click And Collect To Store

The New York Times bestselling novel from John Green, the author of multi-million bestseller The Fault in Our Stars, and David Levithan, author of Nick and Nora's Infinite Playlist. ---------- 'Funny, rude and original' - New York Times Book Review 'Will have readers simultaneously laughing, crying and singing at the top of their lungs' - Kirkus Reviews 'This novel has serious buzz' - Entertainment Weekly ---------- One cold night, in a most unlikely corner of Chicago, Will Grayson crosses paths with . . . Will Grayson. Two guys with the same name, running in two very different circles, suddenly find their lives going in new and unexpected directions, and culminating in epic turns-of-heart and the most fabulous musical ever to grace the high-school stage. Told in alternating voices from two award-winning authors - John Green and David Levithan - this unique collaborative novel features a double helping of the heart and humour that has won both authors legions of fans.

John Green (Author) John Green is the award-winning, #1 bestselling author of Looking for Alaska, An Abundance of Katherines, Paper Towns, Will Grayson, Will Grayson (with David Levithan), The Fault in Our Stars and Turtles All the Way Down. John's many accolades include the Printz Medal, a Printz Honor, and the Edgar Award. He has twice been a finalist for the LA Times Book Prize and was selected by TIME magazine as one of the 100 Most Influential People in the World. With his brother, Hank, John is one half of the Vlogbrothers and co-created the online educational series CrashCourse. You can join the millions who follow him on Twitter @johngreen and Instagram @johngreenwritesbooks. John lives with his family in Indianapolis, Indiana.David Levithan (Author) David Levithan is the New York Times bestselling author of many novels for young readers includingEvery Day, Will Grayson, Will Grayson (with John Green), Invisibility (with Andrea Cremer) and Nick and Norah's Infinite Playlist (with Rachel Cohn), which was turned into a feature film. He's the editorial director of Scholastic Press, and has edited hundreds of books including the mega-hits The Hunger Games and Shiver. David lives in Hoboken, New Jersey.