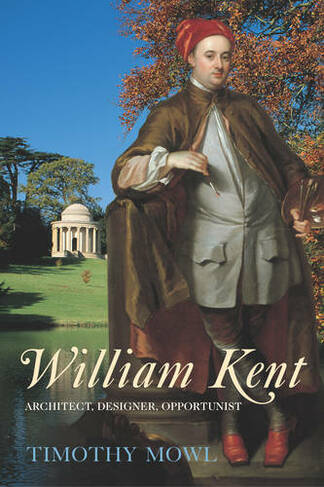 By Timothy Mowl (Author)
Paperback
https://www.whsmith.co.uk/products/william-kent-architect-designer-opportunist/timothy-mowl/paperback/9781845951788-01-000.html £11.95 rrp £12.99 Save £1.04 (8%)
GBP
Availability
Currently unavailable. We don't know when or if this item will be back in stock
Free Saver Delivery on orders over £20
Details
FREE SHIPPING over £20 for Saver Delivery
Share

William Kent (1685-1748) was great without a hint of gravitas, a con man who became one of the artistic geniuses of his age. He was a high camp Yorkshire bachelor, brought back by Lord Burlington from an artistic apprenticeship in Rome where he had painted for a cardinal and won prizes from a pope. In London he charmed the surly old Hanoverian King George I, redecorated Kensington Palace for him with a clumsy bravura, and survived the subsequent critical storm - just. England was in stylistic chaos after rejecting its lawful Stuart rulers and Burlington was imposing a chaste and dreary Palladianism on a philistine island people. Kent saw his chance and never looked back. Queen Caroline, the real ruler, used him to project in sensational garden buildings by the Thames at Richmond her vision of a new scientific Britain. Sir Robert Walpole paid him to turn Houghton Hall in Norfolk into an imperial palace, outshining anything the German monarchs could raise. Another prime minister, the virtuous Henry Pelham, built with Kent a revolutionary suburban bolt-hole in Surrey. Between them they invented the Gothic Revival out at Esher, but have never been given the credit. Late in life, while raising an alabaster temple to Jupiter at Holkham Hall, also in Norfolk, and the sexiest interiors in London on Berkeley Square, Kent was discovering his true genius, laying out casually at Esher, Stowe in Buckinghamshire and Rousham near Oxford, the Arcadian image of the 'English Garden' that would take the continent, even France, by storm as England's only original contribution to European culture. 16pp b/w plates, 8pp colour plates

Timothy Mowl is a Reader in Architectural and Garden History at the University of Bristol. His recent publications include biographies of two eighteenth-century aesthetes, Horace Walpole (1996) and William Beckford (1998), and a polemical study, Stylistic Cold Wars, of John Betjeman and Nikolaus Pevsner (2000). He is currently writing an historic gardens series of the English counties.