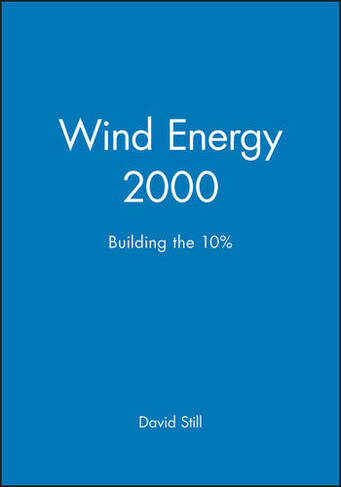 Wind Energy 2000 - Building the 10% looks at the role wind power will play in meeting the Governments 2010 target on electricity generation from renewable sources. New projects, both on and off shore, are expected to contribute almost half of the target, recognising the maturity of the technology. Wind Energy 2000 - Building the 10% includes a special report from the development team of the landmark Blyth Offshore project on the challenges experienced in commissioning the UK's first offshore wind turbines. Changes in both the UK electricity system and the Government's programme of support for renewable energy suggested that the focus of this year's conference should be the new policies. Sessions were accordingly convened as forums with subsequent discussion groups. Papers presented include contributions from the Department of Trade and Industry, the Crown Estate, and the Countryside Agency, including such topics as: The percentage obligation and the new electricity trading arrangements The further development of the offshore wind energy industry Regional and sustainable development within the planning system.

David Still is the author of Wind Energy 2000: Building the 10%, published by Wiley.