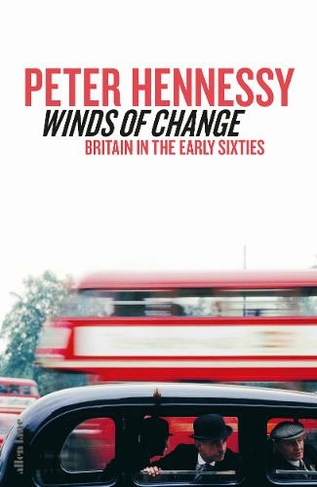 Winds of Change: Britain in the Early Sixties

From the celebrated author of Never Again and Having It So Good, a wonderfully vivid new history of Britain in the early 1960s Harold Macmillan famously said in 1960 that the wind of change was blowing over Africa and the remaining British Empire. But it was blowing over Britain too - its society; its relationship with Europe; its nuclear and defence policy. And where it was not blowing hard enough - the United Kingdom's economy - great efforts were made to sweep away the cobwebs of old industrial practices and poor labour relations. Life was lived in the knowledge that it could end in a single afternoon of thermonuclear exchange if the uneasy, armed peace of the Cold War tipped into a Third World War. In Winds of Change we see Macmillan gradually working out his 'grand design' - how to be part of both a tight transatlantic alliance and Europe, dealing with his fellow geostrategists Kennedy and de Gaulle. The centre of the book is 1963 - the year of the Profumo Crisis, the Great Train Robbery, the satire boom, de Gaulle's veto of Britain's first application to join the EEC, the fall of Macmillan and the unexpected succession to the premiership of Alec Douglas-Home. Then, in 1964, the battle of what Hennessy calls the tweedy aristocrat and the tweedy meritocrat - Harold Wilson, who would end 13 years of Conservative rule and usher in a new era. As in his acclaimed histories of British life in the two previous decades, Never Again and Having it so Good, Peter Hennessy explains the political, economic, cultural and social aspects of a nation with inimitable wit and empathy. No historian knows the by-ways as well the highways of the archives so well, and no one conveys the flavour of the period so engagingly. The early sixties live again in these pages. 32 pp b/w inset

Peter Hennessy is one of Britain's most celebrated historians, 'who has himself become something of a national institution' (Ben Pimlott). He is Attlee Professor of Contemporary British History at Queen Mary University of London. His previous books include this book's two immediate predecessors, Never Again: Britain 1945-51 (1992, winner of the Duff Cooper Prize and the NCR Prize for Non-fiction) and Having it so Good: Britain in the Fifties (2006, winner of the Orwell Prize for Political Writing). His other books include Cabinet (1986), Whitehall (1989), The Prime Minister: The Office and Its Holders Since 1945 (2000), The Secret State: Preparing for the Worst (2002, 2010) and, co-authored with James Jinks, The Silent Deep: The Royal Navy Submarine Service Since 1945 (2015, winner of the Duke of Westminster's Award for Military Literature and the Mountbatten Maritime Award). He was elected a Fellow of the British Academy in 2003 and created an independent crossbench life peer as Lord Hennessy of Nympsfield in 2010.