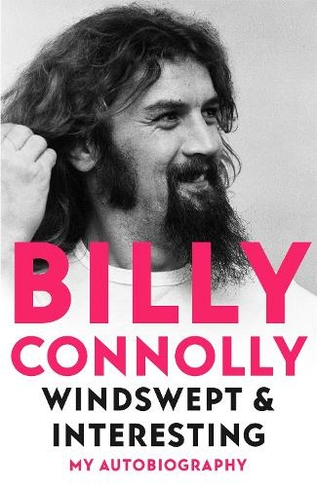 For the very first time, Billy Connolly shares intimate details of his life, in his very own words in a full-length autobiography. Windswept and Interesting is inspired by a friend who he describes as 'exotic himself' that had just returned from Kashmir and said to Billy (who was wearing electric blue flairs and sporting long hair and a beard) "Look at you - all windswept and interesting".

Billy was born in Glasgow in 1942. He was sadly orphaned by the age of 4 and went on to suffer terrible abuse at the hands of his family. Billy's first job and escape was as an apprentice welder in the shipyards of the River Clyde.

Later he discovered a real talent for playing the banjo and became a rambling man. What set him apart however was his comedic talent - his ability to hold an audience, tell jokes and stories that set him on the path to fame and fortune. He was outspoken and unfiltered - calling out hypocrisy at every turn. His stand-up was warm and silly and audiences fell in love with witty charm. His wardrobe was as famous as his joke-telling with leotards, scissor suits, and banana boots adding to his allure.

Billy catapulted to fame after an appearance on Michael Parkinson and he soon became a National star. Documentaries, Hollywood films, and TV shows were aplenty as well countless stand-up appearances, but following a Parkinson's and cancer diagnosis the much-loved comic's live performances were to come to an end.

Windswept and Interesting is cheerfully funny and lighthearted. A truly unforgettable story of a comic legend, packed full of hilarious tales and wisdom.

Sir William Connolly, CBE is a much-loved Scottish comedian, musician, TV presenter, actor, and artist. Now a 'welder statesman', he is the recipient of a BAFTA Lifetime Achievement Award and is regularly voted the nation's favourite stand-up comedian. His collected stand-up routines, TALL TALES & WEE STORIES, was a No.1 bestseller and has spent over a year in the Sunday Times' charts. Billy was born and raised in Glasgow and now lives in America.