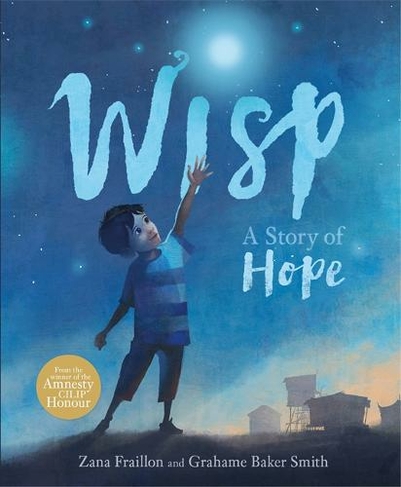 Wisp A Story of Hope

Idris is a child refugee, born into a world of tents and fences. He has known no other life than this. He has no memories of the world outside. Then the Wisp arrives, floating in on the evening breeze. Everyone who holds it finds their memories reawakened, their hopes of freedom reborn. But what about Idris, who has no memories? What will happen when he holds the magical Wisp? Storytelling and imagination have the power to offer hope in this extraordinary picture book from the Amnesty CILIP Honour-winning author of The Bone Sparrow, Zana Fraillon, and Kate Greenaway Medal-winning illustrator Grahame Baker Smith. 'Grahame Baker Smith's haunting and immersive illustration is perfect for this story of hope in the darkest of places' BookTrust

Zana Fraillon worked as a primary school teacher before becoming a full-time writer of fiction and picture books for young children. She is the author of The Ones That Disappeared and The Bone Sparrow, which won the Amnesty CILIP Honour 2017, was shortlisted for the Carnegie Medal and Guardian Children's Book Prize, and has garnered widespread critical acclaim. Zana lives in Victoria, Australia, with her husband and three sons. Grahame Baker Smith studied at Berkshire College of Art and Design, and is the author and illustrator of many picture books in his uniquely lyrical digital style. In 2011, his picture book FArTHER won the Kate Greenaway Medal, the most prestigious prize in British illustration.