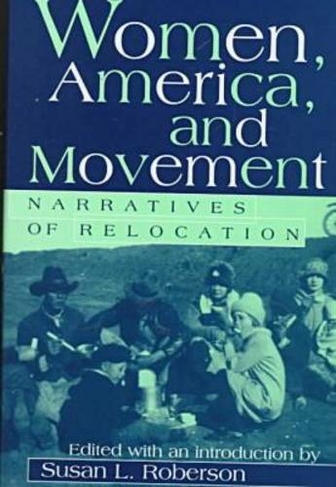 By Susan L. Roberson (Author)
Hardback
https://www.whsmith.co.uk/products/women-america-and-movement-narratives-of-relocation/susan-l-roberson/hardback/9780826211767-01-000.html £51.95
GBP
Availability
Currently unavailable. We don't know when or if this item will be back in stock
Share

Since the colonial days, American women have traveled, migrated, and relocated, always faced with the challenge of reconstructing their homes for themselves and their families. Women, America, and Movement offers a journey through largely unexplored territory--the experiences of migrating American women. These narratives, both real and imagined, represent a range of personal and critical perspectives; some of the women describe their travels as expansive and freeing, while others relate the dreadful costs and sacrifices of relocating. Despite the range of essays featured in this study, the writings all coalesce around the issues of politics, poetry, and self- identity described by Adrienne Rich as the elements of the "politics of location," treated here as the politics of relocation. The narratives featured in this book explore the impact of race, class, and sexual economics on migratory women, their self-identity, and their roles in family and social life. These issues demonstrate that in addition to geographic place, ideology is itself a space to be traversed. By examining the writings of such women as Louise Erdrich, Zora Neale Hurston, and Gertrude Stein, the essayists included in this volume offer a variety of experiences. The book confronts such issues as racist politicking against Native Americans, African Americans, and Asian immigrants; sexist attitudes that limit women to the roles of wife, mother, and sexual object; and exploitation of migrants from Appalachia and of women newly arrived in America. These essays also delve into the writings themselves by looking at what happens to narrative structure as authors or their characters cross geographic boundaries. The reader sees how women writers negotiate relocation in their texts and how the written word becomes a place where one finds oneself. index

Susan L. Roberson is Instructor of English at Auburn University in Alabama. She is the author of Emerson in His Sermons: A Man-Made Self.