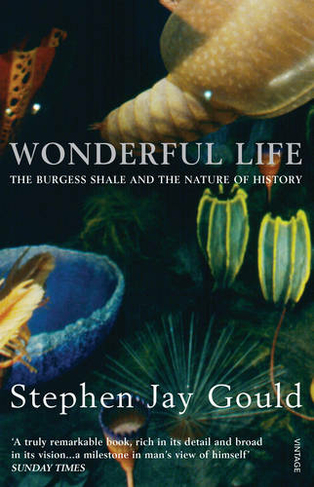 By Stephen Jay Gould (Author)
Paperback
https://www.whsmith.co.uk/products/wonderful-life/stephen-jay-gould/paperback/9780099273455-12-000.html N/A
GBP
Availability
Currently unavailable. We dont know when or if this item will be back in stock
Free Saver Delivery on orders over £25
Details
FREE SHIPPING over £25 for Saver Delivery
Share

High in the Canadian Rockies is a small limestone quarry formed 530 million years ago. Called the Burgess Shale, it holds the remains of an ancient sea where dozens of strange creatures lived - a forgotten corner of evolution preserved in incredible detail. In this book Stephen Jay Gould explores what the Burgess Shale might tell us about evolution and the nature of history. The Darwinian theory of evolution is a well-known, well-explored area. But there is one aspect of human life which this theory of evolution fails to account for: chance. Using the brilliantly preserved fossil fauna of the Burgess Shale as his case study, Gould argues that chance was in fact one of the decisive factors in the evolution of life on this planet, and that, with a flip of coin, everything could have been very different indeed.

Wonderful Life
Wonderful Life
Stephen Jay Gould
Paperback
Currently unavailable. We dont know when or if this item will be back in stock
https://www.whsmith.co.uk/products/wonderful-life/stephen-jay-gould/paperback/9780099273455.html N/A
GBP