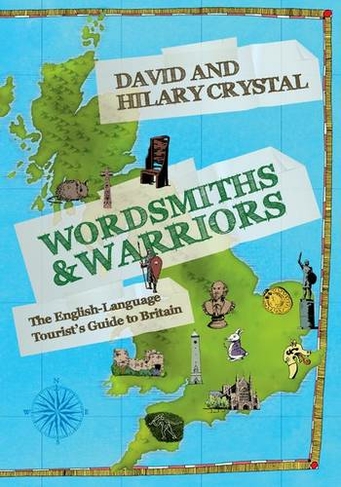 Wordsmiths and Warriors The English-Language Tourist's Guide to Britain

Wordsmiths and Warriors explores the heritage of English through the places in Britain that shaped it. It unites the warriors, whose invasions transformed the language, with the poets, scholars, reformers, and others who helped create its character. The book relates a real journey. David and Hilary Crystal drove thousands of miles to produce this fascinating combination of English-language history and travelogue, from locations in south-east Kent to the Scottish lowlands, and from south-west Wales to the East Anglian coast. David provides the descriptions and linguistic associations, Hilary the full-colour photographs. They include a guide for anyone wanting to follow in their footsteps but arrange the book to reflect the chronology of the language. This starts with the Anglo-Saxon arrivals in Kent and in the places that show the earliest evidence of English. It ends in London with the latest apps for grammar. In between are intimate encounters with the places associated with such writers as Chaucer, Shakespeare, and Wordsworth; the biblical Wycliffe and Tyndale; the dictionary compilers Cawdrey, Johnson, and Murray; dialect writers, elocutionists, and grammarians, and a host of other personalities. Among the book's many joys are the diverse places that allow warriors such as Byrhtnoth and King Alfred to share pages with wordsmiths like Robert Burns and Tim Bobbin, and the unexpected discoveries that enliven every stage of the authors' epic journey. 160 Full Colour Photographs, Figures

David Crystal is known throughout the world as a writer, editor, lecturer and broadcaster on language. He has published extensively on the history and development of English, including The Stories of English (2004), Evolving English (2010), Begat: The King James Bible and the English Language (2010), The Story of English in 100 Words (2011), and Spell It Out: The Singular Story of English Spelling (2012).Hilary Crystal trained as a speech therapist, worked for a while in clinical linguistic research, then became a sub-editor for the various volumes in the Cambridge and Penguin families of encyclopedias. She has designed several books, notably the anthologies of the poetry of John Bradburne edited by David.