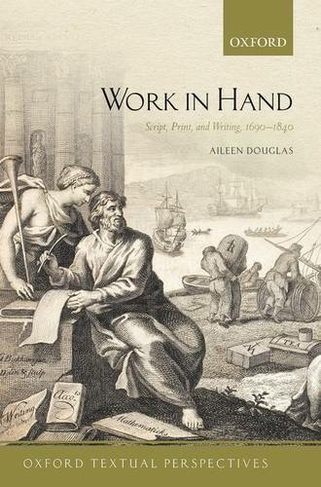 Oxford Textual Perspectives is a new series of informative and provocative studies focused upon literary texts (conceived of in the broadest sense of that term) and the technologies, cultures and communities that produce, inform, and receive them. It provides fresh interpretations of fundamental works and of the vital and challenging issues emerging in English literary studies. By engaging with the materiality of the literary text, its production, and reception history, and frequently testing and exploring the boundaries of the notion of text itself, the volumes in the series question familiar frameworks and provide innovative interpretations of both canonical and less well-known works. Work in Hand: Script, Print, and Writing, 1690-1840 argues that between the late seventeenth and early nineteenth centuries manual writing was a dynamic technology. It examines script in relation to becoming a writer; in constructions of the author; and in emerging ideas of the human. Revising views of print as displacing script, Work in Hand argues that print reproduced script, print generated script; and print shaped understandings of script. In this, the double nature of print, as both moveable type and rolling press, is crucial. During this period, the shapes of letters changed as the multiple hands of the early-modern period gave way to English round hand; the denial of writing to the labouring classes was slowly replaced by acceptance of the desirability of universal writing; understandings of script in relation to copying and discipline came to be accompanied by ideas of the autograph. The work begins by surveying representations of script in letterpress and engraving. It discusses initiation into writing in relation to the copy-books of English writing masters, and in the context of colonial pedagogy in Ireland and India. The middle chapters discuss the physical work of writing, the material dimensions of script, and the autograph, in constructions of the author in the late eighteenth and early nineteenth centuries, and in relation to Samuel Johnson, Alexander Pope, William Blake, Isaac D'Israeli, and Maria Edgeworth. The final chapter considers the emerging association of script with ideas of the human in the work of the Methodist preacher Joseph Barker. 12 Illustrations

Aileen Douglas was born in Dublin and did her undergraduate work at Trinity College Dublin. She holds a PhD from Princeton University. For several years she taught at Washington University in St. Louis before returning to Ireland to join the School of English, TCD. Her research interests and publications focus on eighteenth-century print culture, the materiality of writing, women's writing in the long eighteenth century, and Irish writing. She served as Dean ofUndergraduate Studies (2008-2011) and is a fellow of Trinity College Dublin.