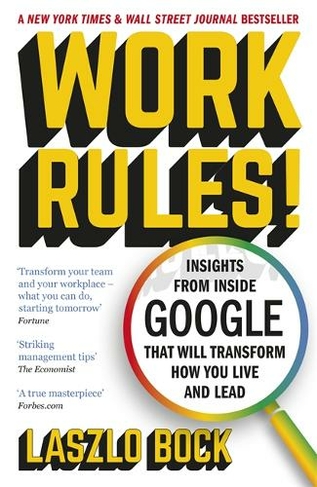 Work Rules!: Insights from Inside Google That Will Transform How You Live and Lead

By Laszlo Bock (Author)
Paperback
https://www.whsmith.co.uk/products/work-rules-insights-from-inside-google-that-will-transform-how-you-live-and-lead/laszlo-bock/paperback/9781444792386-12-000.html £9.01 rrp £10.99 Save £1.98 (18%)
GBP
Availability
In Stock
Free Delivery Available When You Spend £25 Or More
Details
Spend £25 On Products To Receive Free Standard Delivery To Your Home Or Free Next Working Day Click And Collect To Store

A New York Times and Wall Street Journal Bestseller Daily Telegraph, Huffington Post & Business Insider Top Business Book to Read 'Every year, 2 million people apply for a job at Google - so what's the secret?' Guardian A compelling manifesto with the potential to change how we work and live, Work Rules! offers both a philosophy of the new world of work and a blueprint for attracting the most spectacular talent and ensuring the brightest and best prosper. The way we work is changing - are you?

Laszlo Bock leads Google's people function, which includes all areas related to the attraction, development, and retention of 'Googlers', of which there are more than 50,000 in seventy offices worldwide. His revolutionary methods have transformed how Silicon Valley harnesses the greatest talent on the planet. During his tenure, Google has been recognized over 100 times as an exceptional employer, including being named the #1 Best Company to work for in the US and sixteen other countries. Laszlo has advised President Obama's Economic Recovery Advisory Board and the Office of Personnel Management, and been featured in The Wall Street Journal, New York Times, PBS Newshour and on the Today Show.