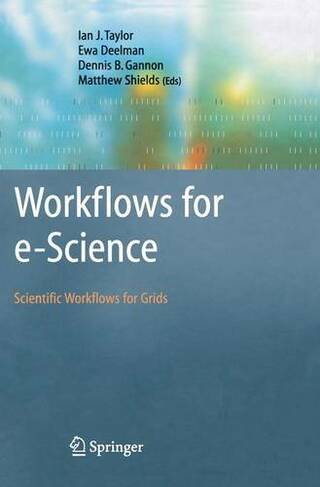 This is a timely book presenting an overview of the current state-of-the-art within established projects, presenting many different aspects of workflow from users to tool builders. It provides an overview of active research, from a number of different perspectives. It includes theoretical aspects of workflow and deals with workflow for e-Science as opposed to e-Commerce. The topics covered will be of interest to a wide range of practitioners. 7 Tables, black and white; XXII, 526 p.

Dr. Ian Taylor has been a Lecturer at Cardiff University's School of Computer Science since 2002. He concurrently holds an adjunct Assistant Professorship at the Center for Computation & Technology at Louisiana State University and regularly offers consultations in the USA. He has a Ph.D. in Physics and Music and is the co-ordinator of Triana activities at Cardiff (http://www.trianacode.org). Through this he has been active in many major projects including GridLab, CoreGrid and GridOneD. His research interests include distributed techniques and workflow for Grid and P2P computing, which take in applications ranging from astrophysics and healthcare to distributed audio.Ian has previously written a professional book for Springer on P2P, Web Services and Grids, and has published over 50 scientific papers. He has also co-edited a special edition for Journal of Grid Computing on Scientific Workflow.Dr. Matthew Shields has been a research associate at Cardiff University, jointly in the Schools of Computer Science, Physics and Astronomy, since 2001. He gained his Ph.D. in Computer Science from Cardiff University in the area of problem solving environments. Dr Shields is one of two lead developers for the Triana project and has been responsible for helping broaden its adoption within new application domains including biodiversity. His interests include problem solving environments, workflow, component and service based computing, Grid and high-performance computing.Ewa Deelman is an Research Assistant Professor at the USC Computer Science Department and a Research Team Leader at the Center for Grid Technologies at the USC Information Sciences Institute. Dr. Deelman's research interests include the design and exploration of collaborative scientific environments based on Grid technologies, with particular emphasis on workflow management as well as the management of large amounts of data and metadata. At ISI, Dr. Deelman is leading the Pegasus project, which designs and implements workflow mapping techniques for large-scale workflows running in distributed environments. Pegasus is being used day-to-day by scientists in a variety of disciplines including astronomy, gravitational-wave physics, earthquake science and many others. Prior to joining ISI in 2000, she was a Senior Software Developer at UCLA conducting research in the area of performance prediction of large-scale applications on high performance machines. Dr. Deelman received her PhD from Rensselaer Polytechnic Institute in Computer Science in 1997 in the area of parallel discrete event simulation. Dr. Deelman is an Associate Editor responsible for Grid Computing for the Scientific Programming Journal and a chair of the GGF Workflow Management Research Group.Dennis Gannon, Department of Computer Science, Lindley Hall, Indiana University, Bloomington, IN 47401 (gannon@cs.indiana.edu) Dr. Gannon is a professor of Computer Science in the School of Informatics at Indiana University. He is also Science Director for the Indiana Pervasive Technology Labs. He received his Ph.D. in Computer Science from the University of Illinois in 1980 and his Ph.D. in Mathematics from the University of California in 1974. From 1980 to 1985, he was on the faculty at Purdue University. From 1997-2004 he was Chairman of the Indiana Computer Science Department. His research interests include software tools for high performance parallel and distributed systems and problem solving environments for scientific computation.