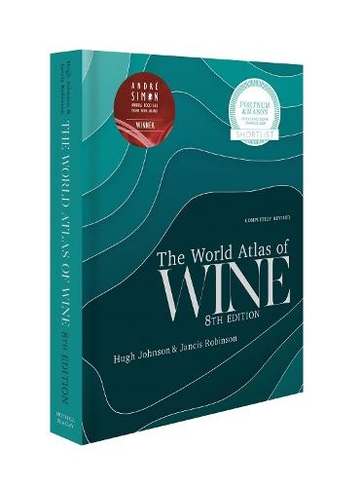 Winner of the Andre Simon Drink Book of the Year Shortlisted for the Louis Roederer Wine Book of the Year 2020 "One book deserves a place on every wine drinker's shelf, and that is The World Atlas of Wine" - Victoria Moore in the Telegraph "magisterial" - Fiona Beckett, Guardian "a key reference material for any sommelier, wine professional or any amateur serious about their passion" - Imbibe "The most useful single volume on wine ever published... If I owned only one wine book, it would be this one." - Andrew Jefford, Decanter Few wine books can be called classic, but the first edition of The World Atlas of Wine made publishing history when it appeared in 1971. It is recognized by critics as the essential and most authoritative wine reference work available. This eighth edition will bring readers, both old and new, up to date with the world of wine. To reflect all the changes in the global wine scene over the past six years, the Atlas has grown in size to 416 pages and 22 new maps have been added to the wealth of superb cartography in the book. The text has been given a complete overhaul to address the topics of most vital interest to today's wine-growers and drinkers. With beautiful photography throughout, Hugh Johnson and Jancis Robinson, the world's most respected wine-writing duo, have once again joined forces to create a classic that no wine lover can afford to be without. "The World Atlas of Wine is the single most important reference book on the shelf of any wine student." - Eric Asimov, New York Times 'Simply superb work... buy it if you like wine at all.' - Victoria Moore, Telegraph "Like a good bottle of wine, you'll find yourself going back to it again and again... Perfect for anyone who has a thirst for greater wine knowledge." - Edward Deitch, NBC/today.com "The World Atlas of Wine belongs on your shelf... The essential rootstock of any true wine lover's library. A multi-layered snapshot of wine and how it has evolved." - Dave McIntyre, Washington Post c.400 illustrations and photographs, 235 maps including 22 new

Hugh Johnson (Author) Hugh Johnson is the world's pre-eminent writer on wine. First published in 1977, his Pocket Wine Book sells hundreds of thousands of copies a year. His winning formula of insight, critical appraisal of the world of wine, plus valuable vintage news and wine recommendations has been often-imitated but never bettered. With the publication of his first book, Wine, Johnson established himself at the age of twenty-seven as the most refreshing and authoritative voice on the subject. During the past four decades he has written books that have become landmarks on the subject, including his classic The World Atlas of Wine, co-authored with Jancis Robinson, his Wine Companion, first published in 2003, The Story of Wine and Hugh Johnson on Wine. In his spare time he writes about gardening from his home in London.Jancis Robinson (Author) Jancis Robinson is described by Decanter magazine as "the most respected wine critic and journalist in the world". Jancis writes daily for her website, jancisrobinson.com (awarded the first ever Wine Website of the Year accolade in the Louis Roederer International Wine Writers Awards 2010), weekly for the Financial Times, and bimonthly for a column that is syndicated around the world. But many know her best for her hugely admired reference books; in addition to co-authoring The World Atlas of Wine, she is editor of The Oxford Companion to Wine and co-author of Wine Grapes.Critically acclaimed as the "woman who makes the wine world gulp when she speaks" (USA Today) and "our favourite wine writer" (Playboy), Jancis was the first person outside the wine trade to qualify as a Master of Wine, in 1984. She was awarded an OBE in 2003 by Her Majesty the Queen, on whose cellar she now advises. In one week in April 2016 she was presented with France's Officier du Merite Agricole, the German VDP's highest honour (the golden pin, presented by previous recipient Hugh Johnson) and, in the US, her fourth James Beard Award.