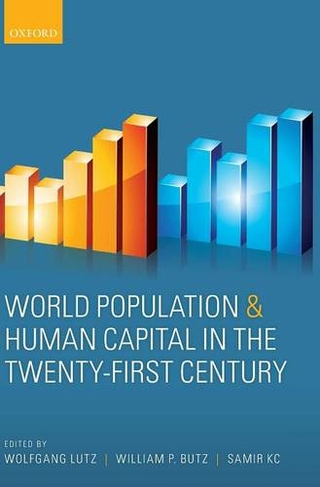 World Population and Human Capital in the Twenty-First Century

This book addresses systematically and quantitatively the role of educational attainment in global population trends and models. Seven background chapters summarize past trends in fertility, mortality, migration, and education; examine relevant theories and identify key determining factors; and set the assumptions that are subsequently translated into alternative scenario projections to 2100. These assumptions derive from a global survey of hundreds of experts and five expert meetings on as many continents. Another chapter details their translation into multi-dimensional projections by age, sex, and level of education. The book's final chapters analyse the results, emphasizing alternative trends in human capital, new ways of studying ageing and the quantification of alternative population, and education pathways in the context of global sustainable development. An appendix and associated web link present detailed results for all countries. The book shows that adding education to age and sex substantially alters the way we see the future. Figures and Tables

Wolfgang Lutz is Founding Director of the Wittgenstein Centre for Demography and Global Human Capital, a new collaboration between the International Institute for Applied Systems Analysis (IIASA), the Austrian Academy of Sciences and the WU-Vienna University of Economics and Business. He is director of the Vienna Institute of Demography of the Austrian Academy of Sciences and Professor of Applied Statistics at the WU. He is also Professorial Research Fellow at theOxford Martin School for 21st Century Studies. He is author of the series of world population projections produced at IIASA and has developed approaches for projecting education and human capital. He is also principal investigator of the Asian MetaCentre for Population and Sustainable DevelopmentAnalysis. Lutz is author and editor of 28 books and more than 200 refereed articles, including 8 in Science and Nature. In 2008 he received an ERC Advanced Grant, in 2009 the Mattei Dogan Award of the IUSSP, and in 2010 the Wittgenstein Prize.William P. Butz is a Senior Research Scholar with the World Population Program and Director of Coordination and Outreach at the Wittgenstein Centre for Demography and Global Human Capital. Previously he was president and chief executive officer of the Population Reference Bureau. Before joining PRB, he was senior economist at the RAND Corporation; associate director of the US Census Bureau, where he was in charge of household surveys, international activities, and population estimates andprojections, and division director for social and behavioral sciences at the National Science Foundation. Mr Butz has taught economic development at UCLA and the University of California at Santa Barbara, served on numerous commissions and boards, and written more than 80 research and policy papers on avariety of topics related to economic demography, nutrition and health, and statistical and science policy. Since 2001, he has served on the Board of Reviewing Editors of Science magazine. Samir KC is Leader of the project 'Modelling Human Capital Formation' at the Wittgenstein Centre for Demography and Global Human Capital, International Institute for Applied Systems Analysis. KC's master's degree in statistics is from Tribhuvan University, Nepal (1997). Subsequently, he taught university statistics in Kathmandu and worked as a biostatistician at the Nepal Health Research Council. KC received his PhD from the University of Groningen, the Netherlands (2009) and has worked as aResearch Scholar at the World Population Program at IIASA since 2005. His major research interests are: developing and applying multi-state population models in demographic analysis and projections with a particular focus on modeling human capital formation in education and health; and differentialvulnerability to natural disasters. KC has published in Science magazine (2011) and other peer-reviewed journals.