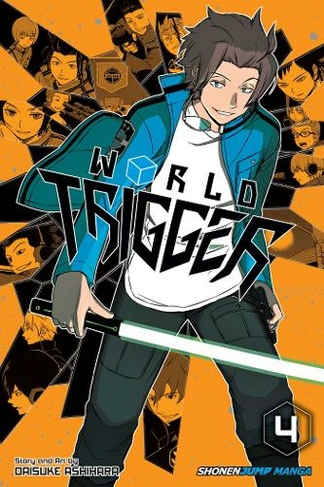 By Daisuke Ashihara (Author)
Paperback
https://www.whsmith.co.uk/products/world-trigger-vol-4-4/daisuke-ashihara/paperback/9781421577678-12-000.html £5.94 rrp £6.99 Save £1.05 (15%)
GBP
Availability
In Stock
Free Delivery Available When You Spend £25 Or More
Details
Spend £25 on eligible products to receive free standard delivery to home or free next working day click and collect to store
Share

Destroy thy Neighbor! A gate to another dimension has burst open, and invincible monsters called Neighbors invade Earth. Osamu Mikumo may not be the best among the elite warriors who co-opt other-dimensional technology to fight back, but along with his Neighbor friend Yuma, he'll do whatever it takes to defend life on Earth as we know it. Should Border, Earth's defense agency, admit a Neighbor into their ranks? Jin and Arashiyama Squad think so, and they clash against headquarters' top agents to preserve Yuma's right to enlist. After the brutal fight against his friends and peers, Jin makes an unimaginable sacrifice to put an end to the hostility and protect Yuma's future at Border. 0 EU Toy Safety Directive - No warning

Daisuke Ashihara began his manga career at the age of 26 when his manga Room 303 won second place in the 75th Tezuka Awards. His first series, Super Dog Rilienthal, began serialization in Weekly Shonen Jump in 2009. World Trigger is his second serialized work in Weekly Shonen Jump. He is also the author of several shorter works, including the one-shots Super Dog Rilienthal and Trigger Keeper and Elite Agent Jin.