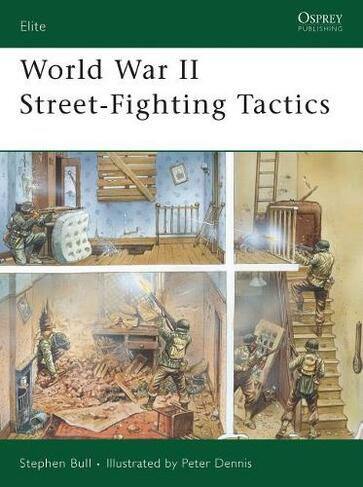 Osprey's study of street-fighting tactics during World War II (1939-1945). In a continuation of the tactics mini-series, this new book describes and analyzes the physical tactics of the close-quarter fighting that took place in the ruined cities on both the Western and Eastern Fronts of World War II. Street-to-street fighting in cities was not a new development, but the bombed-out shells of cities and advances in weaponry meant that World War II took it to a new level of savagery and violence. New tactics developed around the defenses that ruined cities offered. This book examines these tactics, describing how a small group of infantry could now destroy whole tank units for very little cost before melting away into the cities' rubble. It also analyzes the need for infantry units to clear ruins of the enemy, and looks at how this was done, and the cost of the slow house-to-house fighting that was seen across the war, from Stalingrad to Berlin. Packed with eye-witness accounts, tutorials from original training manuals, maps, and full color artwork which illustrates these tactics, this is an eye-opening insight into the tactics and experiences of infantry fighting their way through ruined cities in the face of heavy casualty rates and vicious resistance. Illustrations

Dr Stephen Bull is the Curator of the Museum of Lancashire in Preston, which incorporates the collections of several local regiments. Born in 1960, he graduated from the University of Wales with a BA (Hons) in history in 1981, and obtained his doctorate from University College, Swansea, with a study of English Civil War weapons. For several years from 1984 he worked at the National Army Museum, on a fortifications project and later in the Weapons Department. He has written numerous articles for specialist journals, including a number on the weapons and tactics of World War I. The author lives in Preston, UK.