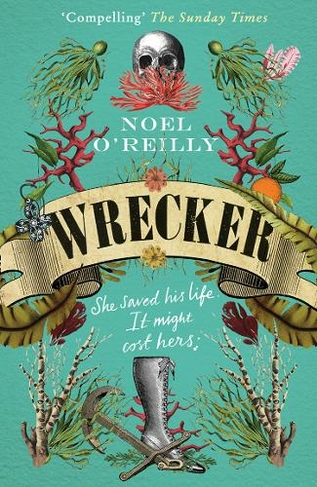 By Noel O'Reilly (Author)
Paperback
https://www.whsmith.co.uk/products/wrecker/noel-oreilly/paperback/9780008274542-03-000.html £5.59 rrp £7.99 Save £2.40 (30%)
GBP
Availability
In Stock
Free Delivery Available When You Spend £25 Or More
Details
Spend £25 On Products To Receive Free Standard Delivery To Your Home Or Free Next Working Day Click And Collect To Store

'Compelling' Sunday Times A powerful debut exploring the dark side of Cornwall - the wrecking and the drowned sailors - where poverty drove villagers to dark deeds... Shipwrecks are part of life in the remote village of Porthmorvoren, Cornwall. And as the sea washes the bodies of the drowned onto the beach, it also brings treasures: barrels of liquor, exotic fruit, the chance to lift a fine pair of boots from a corpse, maybe even a jewel or two. When, after a fierce storm, Mary Blight rescues a man half-dead from the sea, she ignores the whispers of her neighbours and carries him home to nurse better. Gideon Stone is a Methodist minister from Newlyn, a married man. Touched by Mary's sacrifice and horrified by the superstitions and pagan beliefs the villagers cling to, Gideon sets out to bring light and salvation to Porthmorvoren by building a chapel on the hill. But the village has many secrets and not everyone wants to be saved. As Mary and Gideon find themselves increasingly drawn together, jealousy, rumour and suspicion is rife. Gideon has demons of his own to face, and soon Mary's enemies are plotting against her... Gripping, beautifully written and utterly beguiling, Noel O'Reilly's debut WRECKER is a story of love, injustice, superstition and salvation, set against Cornwall's dark past.

Noel O'Reilly was a student on the New Writing South Advanced writing course. He has worked as a journalist and editor at the international business media company RBI, and is now a freelance writer. Wrecker was his first novel. He lives in Brighton with his wife and children.