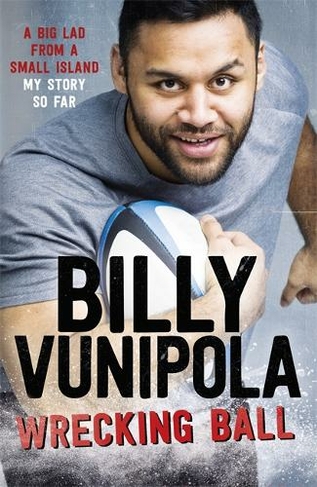 Wrecking Ball: A Big Lad From a Small Island - My Story So Far

Voted Rugby Book of the Year at the 2018 Sports Book Awards. Wrecking Ball is a captivating and humorous memoir by Billy Vunipola, one of the stars of England's recent rugby renaissance, and will be enjoyed by those who have read the recent autobiographies by Jonny Wilkinson, Brian O'Driscoll, Dan Carter and Paul O'Connell. Standing at 6 feet 2 inches and weighing almost 20 stone, Billy is a rampaging and unmissable presence on the rugby pitch, for both club and country. Wrecking Ball is his captivating story so far, chronicling his remarkable personal odyssey of 10,000 miles, from the tiny Tongan village of Longo Longo to the imposing vastness of Twickenham. Join Billy on his journey from the year-round sunshine of Tonga to the bitter cold of a British winter, from his favourite Pontypool kebab shop to finding himself eating broccoli for breakfast, and from carefree childhood games in the middle of the Pacific to the serious business of playing professional rugby in Europe. Wrecking Ball is a wonderfully eccentric and witty book, written with bags of charm. It captures Billy's colourful family and upbringing, and creates a rounded and fascinating portrait of a young man finding his feet as a modern English rugby player. 20-25 colour photos

Born in Sydney, Australia, in 1992 to a father who was a Tongan rugby legend, Billy Vunipola moved to Wales as a child before settling in England and gaining a scholarship to Harrow School.After a spell at Wasps, he joined Saracens in 2013 and has never looked back. His England debut followed that same year, and he has already won 34 caps at the tender age of 24. After a disappointing World Cup in 2015, England - with Vunipola as the spearhead - swept to their first Grand Slam for thirteen years in the 2016 Six Nations. Eddie Jones' rejuvenated side then recorded their first ever Test series in Australia, whitewashing the Wallabies 3-0, with Vunipola again very much to the fore, and then reclaimed their 2017 Six Nations crown.Vunipola was selected in Warren Gatland's British & Irish Lions squad for the tour to New Zealand, but had to withdraw due to injury.