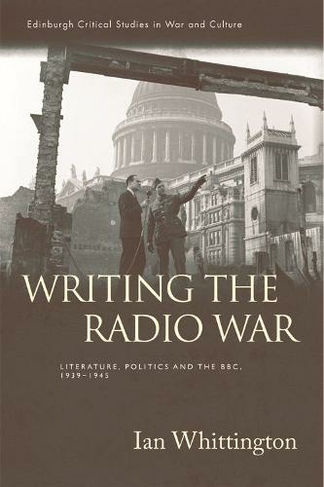 Writing the Radio War: Literature, Politics and the BBC, 1939-1945 (Edinburgh Critical Studies in War and Culture)

Writing the Radio War positions the Second World War as a critical moment in the history of cultural mediation in Britain. Through chapters focusing on the middlebrow radicalism of J.B. Priestley, ground-breaking works by Louis MacNeice and James Hanley at the BBC Features Department, frontline reporting by Denis Johnston, and the emergence of a West Indian literary identity in the broadcasts of Una Marson, Writing the Radio War explores how these writers capitalised on the particularities of the sonic medium to communicate their visions of wartime and postwar Britain and its empire. By combining literary aesthetics with the acoustics of space, accent, and dialect, writers created aural communities that at times converged, and at times contended, with official wartime versions of Britain and Britishness.

Ian Whittington is Assistant Professor of English at the University of Mississippi, where he researches and teaches British and Anglophone culture, with a focus on the intersection of radio and literature in the twentieth century.