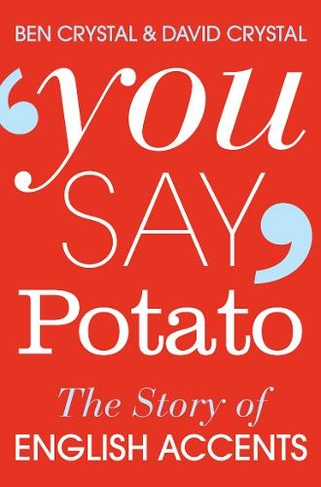 You Say Potato: The Story of English Accents (Unabridged edition)

Some people say scohn, while others say schown. He says bath, while she says bahth. You say potayto. I say potahto And- -wait a second, no one says potahto. No one's ever said potahto. Have they? From reconstructing Shakespeare's accent to the rise and fall of Received Pronunciation, actor Ben Crystal and his linguist father David travel the world in search of the stories of spoken English. Everyone has an accent, though many of us think we don't. We all have our likes and dislikes about the way other people speak, and everyone has something to say about 'correct' pronunciation. But how did all these accents come about, and why do people feel so strongly about them? Are regional accents dying out as English becomes a global language? And most importantly of all: what went wrong in Birmingham? Witty, authoritative and jam-packed full of fascinating facts, You Say Potato is a celebration of the myriad ways in which the English language is spoken - and how our accents, in so many ways, speak louder than words.

Ben Crystal is an actor, producer, and writer. He played Hamlet in the first Original Pronunciation production of the play for 400 years with the Nevada Repertory Company, and curated the British Library's CD, Shakespeare's Original Pronunciation. He co-wrote Shakespeare's Words and The Shakespeare Miscellany with his father, David Crystal, and his first solo book, Shakespeare on Toast: Getting a Taste for the Bard was shortlisted for the 2010 Educational Writer of the Year Award. His new series of introductions to the Bard's plays - Springboard Shakespeare - was published by Bloomsbury / Arden in June 2013. He and his Shakespeare ensemble perform and give Shakespeare workshops around the world.David Crystal works from his home in Holyhead, North Wales, as a writer, editor, lecturer and broadcaster. He has published extensively on the history and development of English, including The Stories of English, Evolving English and Spell It Out: The Singular Story of English Spelling. He held a chair at the University of Reading for ten years, and is now Honorary Professor of Linguistics at the University of Wales, Bangor. He and Ben joined forces again to co-write The Oxford Illustrated Dictionary of Shakespeare (OUP, 2015).