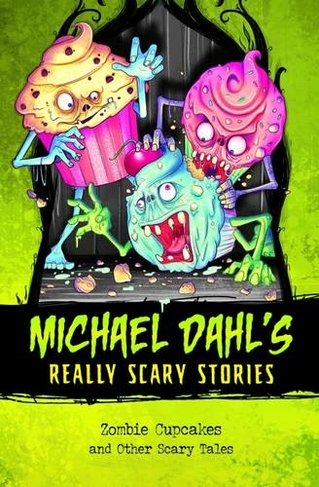 Zombie Cupcakes And Other Scary Tales

After enjoying some tasty cupcakes together, siblings Kareem and Amina hear a loud noise in the cupboards. They are horrified when they open the cupboards and find the leftover cupcakes have come to life and are eating each other! Soon the siblings crave more and more cupcakes, and their desire for sweets is making them crazy. Will Kareem and Amina be able to stop the madness before the zombie cupcakes take over? This collection of scary stories will bring you the answer to that question and many others, but you may never want a cupcake again!

Xavier Bonet is an illustrator and comic-book artist who resides in Barcelona. Experienced in 2D illustration, he has worked as an animator and a background artist for several different production companies. He aims to create works full of color, texture, and sensation, using both traditional and digital tools. His work in children's literature is inspired by magic and fantasy as well as his passion for the art. Michael Dahl is the prolific author of the bestselling Goodnight, Baseball picture book and more than 200 other books for children and young adults. He has won the AEP Distinguished Achievement Award three times for his nonfiction, a Teacher's Choice award from Learning magazine, and a Seal of Excellence from the Creative Child Awards. And he has won awards for his board books for the earliest learners, Duck Goes Potty and Bear Says "Thank You!" Dahl has written and edited numerous graphic novels for younger readers, authored the Library of Doom adventure series, the Dragonblood books, Trollhunters, and the Hocus Pocus Hotel mystery/comedy series. Dahl has spoken at schools, libraries, and conferences across the US and the UK, including ALA, AASL, IRA, and Renaissance Learning. He currently lives in Minneapolis, Minnesota in a haunted house.