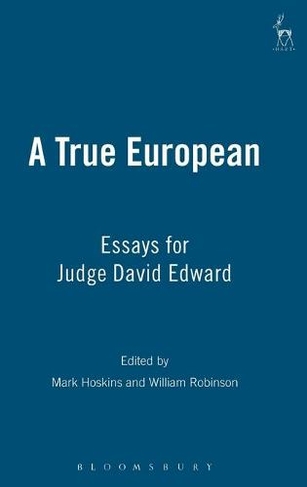 Judge David Edward has enjoyed a glittering career. After a substantial,successful period in Scotland, both as a practising advocate and professor of EC law, he was appointed to the Court of First Instance upon its creation in 1989. He was subsequently appointed to the Court of Justice where he has served for many years. This book has been prepared in honour of his retirement from that position in December 2003. The contributions reflect all aspects of Judge Edward's career as a lawyer, both in Scotland and in Luxembourg. In keeping with the respect with which he is held, contributions have been received from eminent members of the Scottish and Luxembourg judiciary, academics and practitioners. Not surprisingly, the main focus is on Community law, with important contributions on competition, institutional, substantive and remedial issues. This book will be an essential addition to the library of anyone with a genuine interest in Community law. Illustrations

Mark Hoskins is a Barrister and member of Brick Court Chambers,London and Brussels. William Robinson is a Partner of Freshfields, Bruckhaus, Deringer, London.