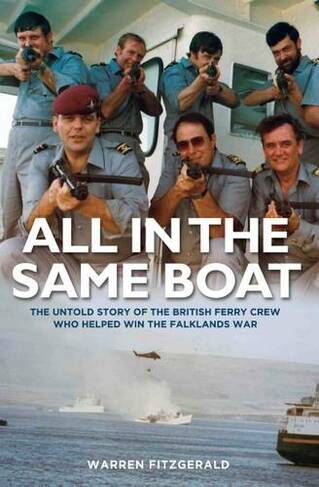 All in the Same Boat: The Untold Story of the British Ferry Crew Who Helped Win the Falklands War

The crew of the Norland were having a whale of a time in 1982, ferrying passengers between Rotterdam and Hull. Especially the 'girls' in the catering crew: Wendy, Frankie and Candy, all stewards and all gay men. So when their ferry was requisitioned by the government to transfer nine hundred paratroopers to Ascension Island for the war in the Falklands, the 'girls' jumped at the chance to be part of the crew. Shockingly, they were asked to carry on right into the heart of the Falklands, where they were to be the very first ship of the entire Task Force to make a landing. Untrained and unprepared, the crew faced heavy bombardment from the Argentinean air force. Miraculously, the Norland survived intact as many other ships were destroyed around it. And, just as miraculously, the paratroopers eventually looked on their camp catering staff as the heroes of their war. Written with the real-life protagonists, this book relates their incredible experiences in a war they never signed up for, while demonstrating how lasting bonds can be formed between the unlikeliest of people.

Warren FitzGerald was born in 1973. His debut novel, The Go-Away Bird, was first published in 2010. It won an Amazon Rising Stars Award in the same year and in 2011 was longlisted for The Authors' Club Best First Book Award; it was also Waterstones Book of the Month in October 2011. For All in the Same Boat, he interviewed many of the surviving crew of MV Norland, to produce one of the most extraordinary true stories to come out of any war. He lives in London.