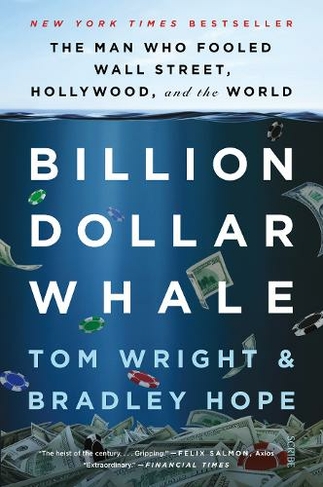 Billion Dollar Whale: the bestselling investigation into the financial fraud of the century

A BOOK OF THE YEAR FOR THE FINANCIAL TIMES AND FORTUNE MAGAZINE. The epic story of how a young social climber from Malaysia pulled off one of the biggest financial heists in history. In 2015, rumours began circulating that billions of dollars had been stolen from a Malaysian investment fund. The mastermind of the heist was twenty-seven-year-old Jho Low, a serial fabulist from an upper-middle-class Malaysian family, who had carefully built his reputation as a member of the jet-setting elite by arranging and financing elaborate parties for Wall Street bankers, celebrities, and even royalty. With the aid of Goldman Sachs and others, Low stole billions of dollars, right under the nose of global financial industry watchdogs. He used the money to finance elections, purchase luxury real estate, throw champagne-drenched parties, and bankroll Hollywood films like The Wolf of Wall Street. Billion Dollar Whale reveals how this silver-tongued con man, a 'modern Gatsby', emerged from obscurity to pull off one of the most audacious financial heists the world has ever seen, and how the financial industry let him. It is a classic harrowing parable of hubris and greed in the financial world.

Tom Wright was one of the first journalists to arrive at the scene of the raid in which Navy SEALs killed Osama bin Laden. In 2013, he spearheaded coverage of the collapse of the Rana Plaza factory in Bangladesh, which killed over 1,000 people, earning the Wall Street Journal a Sigma Delta Chi award from The Society of Professional Journalists. He is a Pulitzer finalist, a Loeb winner, and has garnered numerous awards from the Society of Publishers in Asia, which in 2016 named him 'Journalist of the Year'. He speaks English, Malay, French, and Italian. Bradley Hope has worked for the Wall Street Journal for the last four years, covering finance and malfeasance from New York City and London. Before that, he spent six years as a correspondent in the Middle East, where he covered the Arab Spring uprisings from Cairo, Tripoli, Tunis, and Beirut. He was detained by authorities in Bahrain, reported from the front lines of the Libyan civil war, and has been teargassed in raucous Egyptian protests. Bradley is a Pulitzer finalist and a Loeb winner, and also author of Last Days of the Pharaoh, a chronicle of the final days and hours of the presidency of Hosni Mubarak.