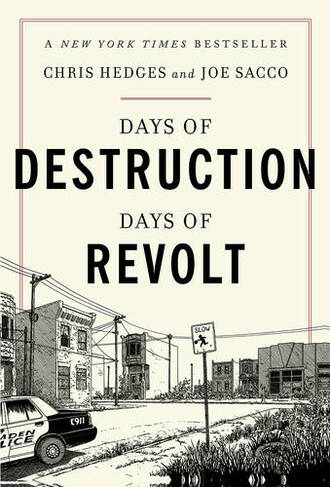 Days of Destruction, Days of Revolt

Named a Best Book of the Year by Amazon.com and the Washington Post Three years ago, Pulitzer Prize-winner Chris Hedges and award-winning cartoonist and journalist Joe Sacco set out to take a look at the sacrifice zones, those areas in America that have been offered up for exploitation in the name of profit, progress, and technological advancement. They wanted to show in words and drawings what life looks like in places where the marketplace rules without constraints, where human beings and the natural world are used and then discarded to maximize profit. Days of Destruction, Days of Revolt is the searing account of their travels. throughout, graphic novel

Chris Hedges is a Pulitzer Prize-winning journalist. He spent nearly two decades as a correspondent in Central America, the Middle East, Africa, and the Balkans, with fifteen years at the New York Times. He is the author of numerous bestselling books, including Empire of Illusion Death of the Liberal Class War is a Force that Gives Us Meaning and Days of Destruction, Days of Revolt, which he co-wrote with Joe Sacco. He writes a weekly column for the online magazine Truthdig. He lives in Princeton, New Jersey.Joe Sacco is a Maltese citizen currently residing in Portland, Oregon. Sacco received his B.A. in journalism at the University of Oregon in 1981. Sacco has gained widespread praise for the depth of his research, the sensitivity of his handling of a delicate subject, as well as for the craft exhibited in his dynamic, sophisticated layouts and bold narrative. In 2001, Sacco received a Guggenheim Fellowship to help pursue his work. Sacco's work about the southern Gaza Strip called Footnotes in Gaza, received the Ridenhour Book Prize in March 2010.