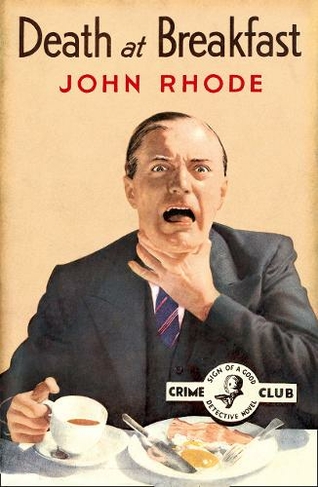 By John Rhode (Author)
Paperback
https://www.whsmith.co.uk/products/death-at-breakfast/john-rhode/paperback/9780008268756-12-000.html £7.37 rrp £8.99 Save £1.62 (18%)
GBP
Availability
In Stock
Free Delivery Available When You Spend £25 Or More
Details
Spend £25 On Eligible Products To Receive Free Standard Delivery To You Home Or Free Next Working Day Click And Collect To Store
Share

A classic winter's crime novel by one of the most highly regarded exponents of the genre. Victor Harleston awoke with uncharacteristic optimism. Today he would be rich at last. Half an hour later, he gulped down his breakfast coffee and pitched to the floor, gasping and twitching. When the doctor arrived, he recognised instantly that it was a fatal case of poisoning and called in Scotland Yard. Despite an almost complete absence of clues, the circumstances were so suspicious that Inspector Hanslet soon referred the evidence to his friend and mentor, Dr Lancelot Priestley, whose deductions revealed a diabolically ingenious murder that would require equally fiendish ingenuity to solve.

John Rhode was a pseudonym for the author Cecil John Charles Street (1884-1964), who also wrote as Miles Burton and Cecil Waye. Having served in the British Army as an artillery officer during the First World War, rising to the rank of Major, he began writing non-fiction before turning to detective fiction, and produced four novels a year for thirty-seven years. The Sunday Times said `he must hold the record for the invention of ingenious forms of murder', and the Times Literary Supplement described him as `standing in the front rank of those who write detective fiction'. Rhode's first series novel, The Paddington Mystery (1925), introduced Dr Lancelot Priestley, who went on to appear in 72 novels, many for Collins Crime Club.