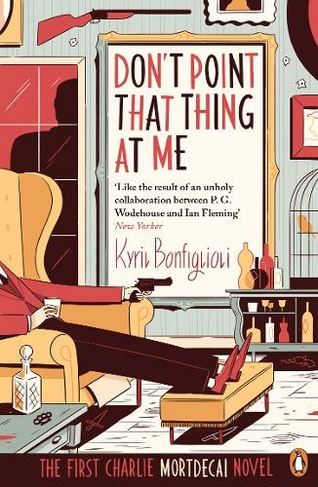 Don't Point That Thing at Me: The First Charlie Mortdecai Novel (Mortdecai)

Don't Point That Thing At Me by Kyril Bonfiglioli - Book 1 of the Mortdecai Trilogy, now a major motion picture starring Johnny Depp Introducing the Hon. Charlie Mortdecai, art dealer, aristocrat and assassin, in the first of the Mortdecai novels Portly art dealer and seasoned epicurean Charlie Mortdecai comes into possesion of a stolen Goya, the disappearance of which is causing a diplomatic ruction between Spain and its allies. Not that that matters to Charlie ... until compromising pictures of some British diplomats also come into his possession and start to muddy the waters. All he's trying to do is make a dishonest living, but various governments, secret organizations and an unbelievably nubile young German don't see it that way and pretty soon he's in great need of his thuggish manservant Jock to keep them all at bay ... and the Goya safe. First published in the 1970s, this hilarious novel is part Ian Fleming part P G Wodehouse. It is now a major motion picture starring Johnny Depp as Mortdecai, Ewan McGregor as Jock and Gwyneth Paltrow. 'A rare mixture of wit and imaginative unpleasantness' Julian Barnes 'You couldn't snuggle under the duvet with anything more disreputable and delightful' Stephen Fry 'The jokes are excellent, but the most horrible things keep happening... Funny and chilling' Sunday Telegraph Kyril Bonfiglioli was born on the south coast of England in 1928 of an English mother and Italo-Slovene father. After studying at Oxford and five years in the army, he took up a career as an art dealer, like his eccentric creation Charlie Mortdecai. He lived in Oxford, Lancashire, Ireland and Jersey, where he died in 1985. He wrote four Charlie Mortdecai novels, and a fifth historical Mortdecai novel (about a distinguished ancestor).

Kyril Bonfiglioli was born on the south coast of England in 1928 of an English mother and Italo-Slovene father. After studying at Oxford and five years in the army, he took up a career as an art dealer, like his eccentric creation Charlie Mortdecai. He lived in Oxford, Lancashire, Ireland and Jersey, where he died in 1985. He wrote the three Mortdecai novels, a fourth historical Mortdecai novel (about a distinguished ancestor), and left a fifth unpublished at his death.