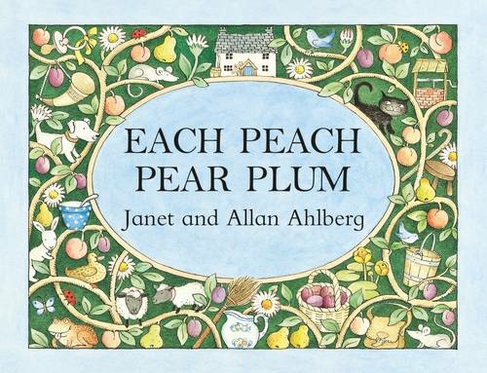 A beautiful brand new cased board book version of this classic picture book by the iconic Janet and Allan Ahlberg. Each Peach Pear Plum introduces characters from well-known nursery stories, such as the Three Bears, Mother Hubbard and Tom Thumb, and encourages children to participate and to find the characters hidden in the pictures. The text, with its strong rhyme and rhythm, is perfect to read aloud to very young children, while the game of 'I Spy' keeps children enthralled. EU Toy Safety Directive - No warning EU Toy Safety Directive - Carries 'CE' logo

Rated 5 out of 5 by Nan22 from Peepo I bought this lovely book for my goddaughters baby. It’s a good fun book whic I had for my own children.

Janet Ahlberg (Author, Illustrator) Janet Ahlberg, along with Allan Ahlberg, created some of the world's most popular picture books, including EACH PEACH PEAR PLUM and THE JOLLY CHRISTMAS POSTMAN, both winners of Greenaway Medals, and THE BABY'S CATALOGUE, inspired by their daughter Jessica. Janet died in 1994.Allan Ahlberg (Author) Allan Ahlberg, a former teacher, postman, plumber's mate and grave digger, is in the super-league of children's writers. He has published over 100 children's books and, with his late wife Janet, created such award winning picture books as EACH PEACH PEAR PLUM and THE JOLLY POSTMAN - both winners of the Kate Greenaway Medal. He has also written prize-winning poetry and fiction and lives in Sussex.