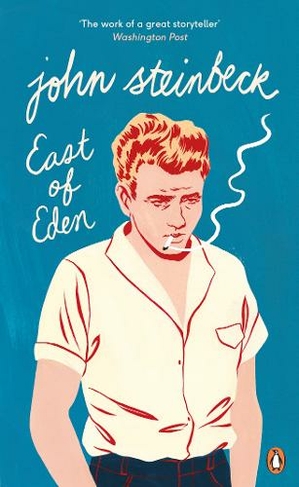 By John Steinbeck (Author)
Paperback
https://www.whsmith.co.uk/products/east-of-eden/john-steinbeck/paperback/9780241980354-12-000.html £7.37 rrp £8.99 Save £1.62 (18%)
GBP
Availability
In Stock
Free Delivery Available When You Spend £25 Or More
Details
Spend £25 On Products To Receive Free Standard Delivery To Your Home Or Free Next Working Day Click And Collect To Store

California's fertile Salinas Valley is home to two families whose destinies are fruitfully, and fatally, intertwined. Over the generations, between the beginning of the twentieth century and the end of the First World War, the Trasks and the Hamiltons will helplessly replay the fall of Adam and Eve and the murderous rivalry of Cain and Abel. East of Eden was considered by Steinbeck to be his magnum opus, and its epic scope and memorable characters, exploring universal themes of love and identity, ensure it remains one of America's most enduring novels. This edition features a stunning new cover by renowned artist Bijou Karman.

John Steinbeck (1902-68) is remembered as one of the greatest and best-loved American writers of the twentieth century. During the 1930s, his works included The Red Pony, Pastures of Heaven, Tortilla Flat, In Dubious Battle, and Of Mice and Men. The Grapes of Wrath, published in 1939, earned him a Pulitzer Prize. In 1962, he was awarded the Nobel Prize for Literature.