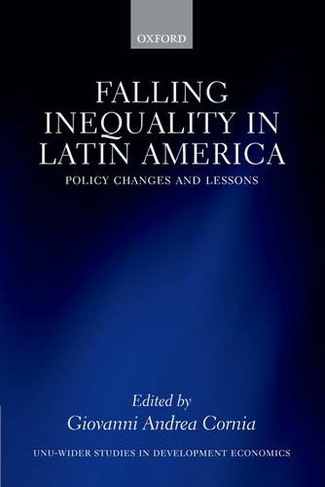 The volume aims to document and explain the sizeable decline of income inequality that has taken place in Latin America during the 2000s. It does so through an exploration of inequality changes in six representative countries, and ten policy chapters dealing with macroeconomics, foreign trade, taxation, labour market, human capital formation, and social assistance, which point to the emergence of a 'new policy model'. The volume addresses a major issue in economic development with profound implications for many developing regions and those OECD countries mired in a long-lasting financial crisis and economic stagnation. For at least the last quarter of the twentieth century, Latin America suffered from low growth, rising inequality, and frequent financial crises. However, since the turn of the century, growth accelerated, inequality declined, poverty fell, and macroeconomic stability improved, all this in parallel to the spread of centre-left political regimes in three quarters of the region. This inequality decline has taken many by surprise as, for a long time, the region has been a symbol of a deeply entrenched unequal distribution of assets, incomes, and opportunities, limited or no state redistribution, and a deeply embedded authoritarianism enforcing an unjust status quo. The recent Latin American experience is particularly valuable as inequality was reduced under open economy conditions and in a period of intensifying global integration, which have often been considered as a source of rising inequality. In this sense, however imperfect, the recent Latin American experience may be of interest to countries completing their transition to the market and liberal democracy (as in the former socialist countries of Europe), facing a political transition (as those affected by the Arab Spring, Myanmar and countries in sub-Saharan Africa), or recording rises in inequality and social tensions in spite of rapid economic growth (as in China and India). Until recently there was not much agreement on the drivers of the inequality decline in the region, which was attributed to changes in the supply/demand of skilled workers, improvements in terms of trade, the spread of social assistance schemes, or 'luck'. In this respect, the volume offers the first scholarly and systematic exploration of this unexpected change. As income inequality has been rising and is currently rising in many parts of the world, a good understanding of the Latin American experience over the 2000s is a topic that will inform and generate a lot of attention. 62 Figures and 90 Tables

Since 2000, Giovanni Andrea Cornia has taught economics at the University of Florence. Prior to that he was the Director of UNU-WIDER and held research positions in various UN agencies. He has lectured in several Italian and foreign universities in both developing and developed countries and has been visiting professors or visiting scholars in six universities. Since 2010 he has been a member of Committee for Development Policies of the United Nations. His mainresearch interests are in the field of development economics, and in particular in the fields of macroeconomics, inequality, poverty, and, political economy as well as food security, famines, and child wellbeing. In all these areas he has published extensively.