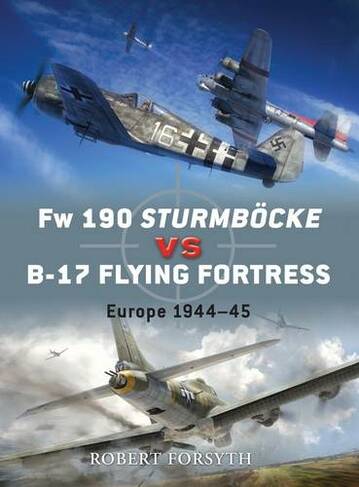 For the first time in the best-selling "Duel" series, Osprey Publishing presents the horrifying aerial clash between a fighter and a bomber. The Fw 190 was one of the best air superiority aircraft of World War II, and when it first appeared over the Channel in 1941 it sent shockwaves through the Allied air commands. By 1944, these fighters had been up-gunned to serve as the front line of defence against the Allied bombing campaign. Although the Fw 190s were responsible for shooting down hundreds of Allied bombers, they met their match against the USAAF B-17 'Flying Fortress'. Capable of carry 4,000 lbs of bombs and bristling with .50cal machine guns, the B-17 could sow death in every direction. Using brand-new artwork and first-hand accounts, this book recreates the deadly drama in the skies above Germany in the closing stages of the war. Illustrations (some col.)

Robert Forsyth has studied the history and operations of the Luftwaffe for many years and has amassed a large archive of documents and reports on Luftwaffe operations gathered from archives and private sources all over the world. He has also met and interviewed numerous former German aircrew. He works full time in publishing and is the author of two titles in the Osprey Aviation Elite Units series - Jagdverband 44 'Squadron of Experten' and Jagdgeschwader 7 'Nowotny' (both 2008). The author lives in Tunbridge Wells, England.