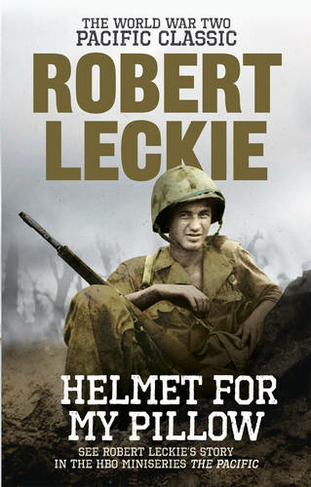 Helmet for my Pillow: The World War Two Pacific Classic

The inspiration behind the HBO series THE PACIFIC Here is one of the most riveting first-person accounts to ever come out of World War 2. Robert Leckie was 21 when he enlisted in the US Marine Corps in January 1942. In Helmet for My Pillow we follow his journey, from boot camp on Parris Island, South Carolina, all the way to the raging battles in the Pacific, where some of the war's fiercest fighting took place. Recounting his service with the 1st Marine Division and the brutal action on Guadalcanal, New Britain and Peleliu, Leckie spares no detail of the horrors and sacrifice of war, painting an unsentimental portrait of how real warriors are made, fight, and all too often die in the defence of their country. From the live-for-today rowdiness of Marines on leave to the terrors of jungle warfare against an enemy determined to fight to the last man, Leckie describes what it's really like when victory can only be measured inch by bloody inch. Unparalleled in its immediacy and accuracy, Helmet for My Pillow tells the gripping true story of an ordinary soldier fighting in extraordinary conditions. This is a book that brings you as close to the mud, the blood, and the experience of war as it is safe to come. 'Helmet for My Pillow is a grand and epic prose poem. Robert Leckie's theme is the purely human experience of war in the Pacific, written in the graceful imagery of a human being who - somehow - survived' Tom Hanks

Robert Leckie was born on December 18, 1920 in Philadelphia. After enlisting in the United States Marine Corps shortly after the attack on Pearl Harbor, he worked in the 1st Marine Division as a machine gunner and as an intelligence scout during the Battle of Guadalcanal. He was later awarded the Purple Heart. Helmet for My Pillow received the Marine Corps Combat Correspondents' Annual Award in 1957. He died in December 2001.