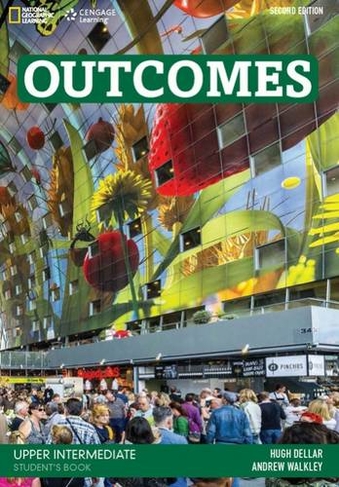 Real situations, real language, real outcomes The second edition of Outcomes is the only course that is consistently focused on helping students achieve the real world communicative outcomes they want and need. This lexically rich course emphasises students' need to have the conversations in English that they would in their own language. This new edition contains more contemporary and global content, reflecting English as it is used in the world and is visible via rewritten texts and new National Geographic photos and videos. There is a strong emphasis on real and natural English usage so students can develop the English language skills necessary for the real world. Contains 1 Paperback / softback and 1 CD-ROM

Hugh Dellar runs London Language Lab, a boutique English-language school in the heart of the English capital, where he continues to enjoy teaching and doing teacher training. He is also the writer of the popular Word of the Day blog, designed for learners and for teachers to use in the classroom. Hugh has been working in the field for almost twenty years, first working as a teacher, trainer and course director at the University of Westminster. He then went on to found the website Lexicallab.com. Hugh is published by National Geographic Learning. As well as the series Outcomes, now in its second edition, he co-wrote the series Innovations, which was shortlisted for the ELTons and the ESU Duke of Edinburgh award. He is currently working with National Geographic Learning on a secondary course Perspectives, which features TED talks.In terms of teaching methodology, he has co-written many articles for publications such as ETP and IATEFL Voices and are popular speakers at conferences all over the world. He has delivered training courses and workshops in over 30 countries. Andrew is married with two children and lives in North London with his partner and son, now his daughter has left home. He grew up in Birmingham and went to Nottingham University, where he studied English Studies. After that he went to Spain to teach English 'for a year' while he decided what he wanted to do with his life. It turned out he wanted to teach English! After that he returned to the UK where he worked in various language schools and adult colleges, completed a DipTEFLA and trained to deliver CELTA courses. He then worked at the University of Westminster for 17 years with a four-year break, when he went back to Valencia with his family. When he isn't working, he plays football twice a week, cycles round the city and enjoys London. He grows vegetables in an allotment, cooks and watches TV.