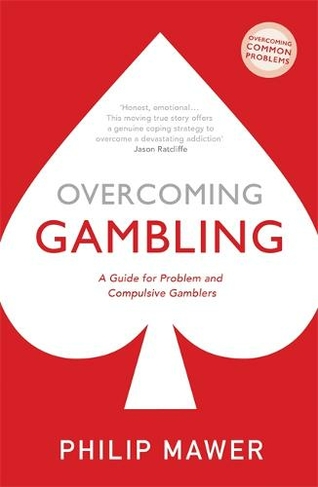 Overcoming Gambling A Guide For Problem And Compulsive Gamblers

By Philip Mawer (Author)
Paperback
https://www.whsmith.co.uk/products/overcoming-gambling-a-guide-for-problem-and-compulsive-gamblers/philip-mawer/paperback/9781529329230-12-000.html £8.19 rrp £9.99 Save £1.80 (18%)
GBP
Availability
In Stock
Free Delivery Available When You Spend £25 Or More
Details
Spend £25 on eligible products to receive free standard delivery to home or free next working day click and collect to store
Share

'If you want to give up gambling, then buying this book will be the best money that you ever spend.' - Paul Buck, recovered compulsive gambler, Founder and CEO of Epic Risk Management Addiction to gambling and its consequences can be devastating - and can affect anyone, from any age or background. This book is designed to help you - or a loved one - stop gambling forever. It will help you, or them, to recognize the phases of problem gambling, and to understand the release that happens when you create, and hit, rock bottom. As you come to learn more about this illness, you'll learn how to deal with the urges and start the path back towards dignity and self-respect. You'll also understand, once and for all, the futility of gambling and the cruel facts about this cruel industry. Himself a recovered compulsive gambler, Phil Mawer has created an effective therapy that has helped countless people break out of their gambling prison and start enjoying life again - and his book will help you, too.

Philip Mawer is a senior manager in overseas catering. Originally from Taunton, Somerset, he has worked in Chad, Sierra Leone, Yemen, Algeria, Afghanistan, Australia, Cyprus and the Ukraine.Phil became involved with gambling at the age of 24 and for over 20 years it was a hugely destructive part of his life. On August 11th, 2006, Phil placed his last bet (in a casino at Frankfurt Airport) after which, having reached Rock Bottom, he embarked on recovery. He wrote the book over a period of 4 years, creating a system based on his own total recovery, in the hope of helping others with gambling addictions. Everything contained within the system and written in the book was, and is, a genuine and real part of Phil's recovery.