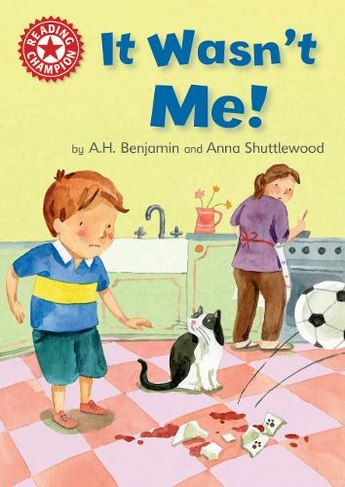 By A.H. Benjamin (Author)
Paperback
https://www.whsmith.co.uk/products/reading-champion-it-wasnt-me-independent-reading-red-2-illustrated-edi/a-h-benjamin/paperback/9781445154541-12-000.html £4.99
GBP
Availability
In Stock
Free Delivery Available When You Spend £25 Or More
Details
Spend £25 On Products To Receive Free Standard Delivery To Your Home Or Free Next Working Day Click And Collect To Store
Share

Who knocked over Cat's dinner? Who splashed the washing with mud? Who spilled the water everywhere? It Wasn't Me! Reading Champion offers independent reading books for children to practise and reinforce their developing reading skills. Fantastic, original stories are accompanied by engaging artwork and a reading activity. Each book has been carefully graded so that it can be matched to a child's reading ability, encouraging reading for pleasure. Independent Reading Red 2 stories are perfect for children aged 4-5 who are reading at book band 2 (Red) in classroom reading lessons. In this story a young boy is mischievous with his football but blames the cat each time something gets broken!

A H Benjamin is an established children's author with 30 titles to his credit. His books have sold worldwide with more than 20 translations, including Chinese, Korean, Turkish and Arabic. Some of his work has been adapted for radio, television and theatre.He's married with four grown up children and four young grandchildren who have all been his inspiration for writing. He lives in Lincolnshire with wife, Trisha. His hobbies are reading, WRITING, walking and playing the playstation 2 (but only football!).When he was a little boy he dreamt of being a cowboy... He still does!