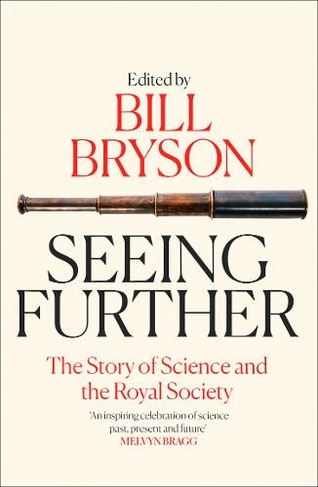 Seeing Further: The Story of Science and the Royal Society

By Bill Bryson (Contributor)
Paperback
https://www.whsmith.co.uk/products/seeing-further-the-story-of-science-and-the-royal-society/bill-bryson/paperback/9780008301620-12-000.html £8.19 rrp £9.99 Save £1.80 (18%)
GBP
Availability
In Stock
Free Delivery Available When You Spend £25 Or More
Details
Spend £25 On Products To Receive Free Standard Delivery To Your Home Or Free Next Working Day Click And Collect To Store
Share

Edited and introduced by Bill Bryson, with contributions from Richard Dawkins, Margaret Atwood, Richard Holmes, Martin Rees, Richard Fortey, Steve Jones, James Gleick and Neal Stephenson amongst others, this beautiful, lavishly illustrated book tells the story of science and the Royal Society, from 1660 to the present. Since its inception in 1660, the Royal Society has pioneered scientific discovery and exploration. The oldest scientific academy in existence, its backbone is its Fellowship of the most eminent scientists in history including Charles Darwin, Isaac Newton and Albert Einstein. Today, its Fellows are the most influential men and women in science, many of whom have contributed to this ground-breaking volume alongside some of the world's most celebrated novelists, essayists and historians. This book celebrates the Royal Society's vast achievements in its illustrious past as well as its huge contribution to the development of modern science. With unrestricted access to the Society's archives and photographs, Seeing Further shows that the history of scientific endeavour and discovery is a continuous thread running through the history of the world and of society - and is one that continues to shape the world we live in today. Index

Bill Bryson is the internationally bestselling author of, amongst others, Notes from a Small Island and A Short History of Nearly Everything, which was shortlisted for the Samuel Johnson Prize, won the Aventis Prize for Science Books in 2004, and was awarded the Descartes Science Communication Prize in 2005.