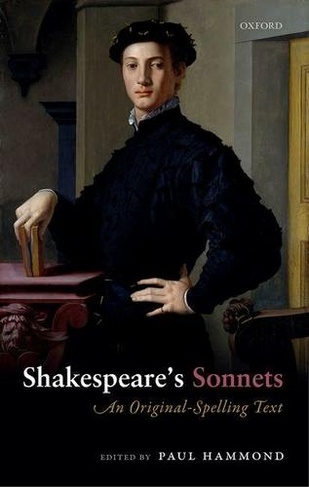 This book is at once an edition of Shakespeare's Sonnets and a guide to how to read these exquisite and complex poems. It is designed both for readers new to the poems and for those who are familiar with the Sonnets but are ready to engage with them afresh. It is the only current edition which provides an original-spelling text of the poems: that is, it prints the poems as they appeared in the first edition, Shake-speares Sonnets (1609), preserving the spelling, punctuation, italics, and capitalization of the original, with only minor interventions where that edition manifestly needs correction. The advantages (and occasional hazards) of reading an original-spelling text are explained, and detailed help is provided in order to assist readers who may be unfamiliar with the conventions of early-modern spelling and punctuation. Six black-and-white halftones

Paul Hammond was educated at Peter Symonds' School, Winchester, and Trinity College, Cambridge, where he was a Prize Fellow from 1978-82. He subsequently taught at the University of Leeds, where he has been Professor of Seventeenth-Century English Literature since 1996. He was elected a Fellow of the British Academy in 2002. His books include Restoration Literature: An Anthology (OUP, 2002), Figuring Sex between Men from Shakespeare to Rochester(OUP, 2002, co-edited with Andrew Hadfield), Shakespeare and Renaissance Europe (The Arden Shakespeare, 2005, co-edited with David Hopkins), Dryden: Selected Poems (Longman, 2006), The Strangeness of Tragedy (OUP, 2009), and John Milton: Life, Writings, Reputation (OUP for the British Academy, 2010, co-edited with BlairWorden).