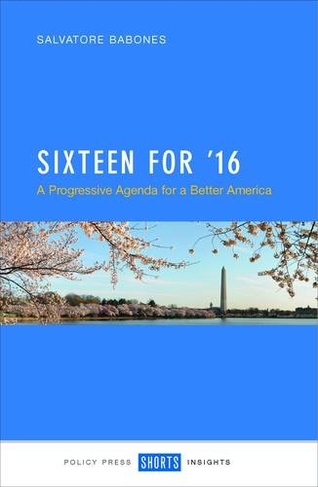 Sixteen for '16 A Progressive Agenda for a Better America?

The progressive movement is on the march in America and this accessible book points toward a destination. Sixteen for '16 offers a new agenda for the 2016 US election crafted around sixteen core principles that all progressives can believe in, from securing jobs to saving the Earth. Decades of destructive social, economic, and political policies have devastated poor, working, and even middle class American communities. It is now clear to everyone that the emperor has no clothes, that harsh austerity does not bring prosperity, and that the wealthy have no intention to see their wealth trickle down. Each generation is no longer better off than the ones that came before. America now needs jobs, infrastructure, a rededication to public education, universal healthcare, higher taxes on higher incomes, a more secure Social Security, an end to the rule of the bankers, stronger unions, a living minimum wage, better working conditions, an end to the prison state, secure reproductive rights, voter equality, a more moral foreign policy, a more sane environmental policy, and action on global warming. Sixteen for '16 is a manifesto which makes the argument for each of these positions, clearly, concisely, and supported by hard data. As ambitious as these policies are, they represent a beginning, not an end. The progressive agenda laid out in Sixteen for '16 charts a realistic path toward a better tomorrow. 18 Halftones, black and white

Salvatore Babones is an Associate Professor of Sociology at the University of Sydney. He is the author or editor of ten books and more than two dozen academic research articles. His research covers the macro-level structure of the global economy with a particular focus on China.Babones writes extensively on international affairs and is a member of Foreign Affairs magazine's "China Brain Trust." He writes a monthly column on China for Al Jazeera English and is a frequent contributor to The National Interest and the Asian Review of Books.