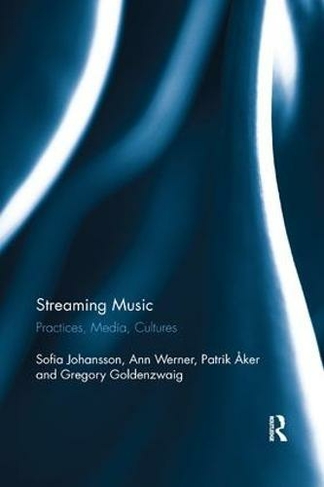 Streaming Music examines how the Internet has become integrated in contemporary music use, by focusing on streaming as a practice and a technology for music consumption. The backdrop to this enquiry is the digitization of society and culture, where the music industry has undergone profound disruptions, and where music streaming has altered listening modes and meanings of music in everyday life. The objective of Streaming Music is to shed light on what these transformations mean for listeners, by looking at their adaptation in specific cultural contexts, but also by considering how online music platforms and streaming services guide music listeners in specific ways. Drawing on case studies from Moscow and Stockholm, and providing analysis of Spotify, VK and YouTube as popular but distinct sites for music, Streaming Music discusses, through a qualitative, cross-cultural, study, questions around music and value, music sharing, modes of engaging with music, and the way that contemporary music listening is increasingly part of mobile, automated and computational processes. Offering a nuanced perspective on these issues, it adds to research about music and digital media, shedding new light on music cultures as they appear today. As such, this volume will appeal to scholars of media, sociology and music with interests in digital technologies. 16 Halftones, black and white; 16 Illustrations, black and white

Sofia Johansson is Senior Lecturer in Media and Communication Studies at Soedertoern University. Her research interests cover different forms of popular culture and the role of media in everyday life. She has extensive experience of qualitative audience research from working on a number of research projects, ranging from popular journalism, media and identity to online sociality, and she has published, for example, on social media use, celebrity culture and online music. She most recently co-authored the book Media Landscapes and Media Cultures: An Introduction (Medielandskap och mediekultur: En introduktion, Liber, 2016). Ann Werner is Associate professor in Gender studies at Soedertoern University. Her main research interests are gender and music, feminist cultural studies and new media technologies. In her work she often combines these three fields of research using both gender and media theory. She defended her dissertation about music use and gender among young Swedish girls in multiethnic suburbs in 2009 and has since then worked on several research projects focusing music and gender. Her publications include work on mobility, Sami music and indigeneity, gender and race in Swedish popular music, as well as streaming music. Patrik Aker is Associate Professor in Media and Communication Studies at Soedertoern University. He has written about a wide range of topics, ranging from visual communication, journalism and historical perspectives on the media, to the relationships between media and spatiality. He has been a co-leader for a research project about the actual buildings for media institutions, and co-authored, as well as contributed, to a number of anthologies. Particular research interest concern media technologies and spatial media infrastructures, and that way that these, on- and offline, interlink with cultural experience. Gregory Goldenzwaig is a music and media researcher affiliated with Soedertoern University in Sweden and Moscow State University in Russia. He defended his thesis on the minority media in Scandinavia at Moscow State University in 2003. His main research focus is the music industries and music consumption, subjects that he has been exploring both as a researcher and as a music practitioner. He has worked as a concert and festival promoter, music venue founder and journalist in Sweden and Russia, also as a university teacher in courses related to journalism and the cultural industries. Goldenzwaig has written several music industries and media mapping reports, commissioned by NDPC/Nordic Council of Ministers, European Music Office, and Music Norway. He is currently working as an editor for the Swedish Institute.