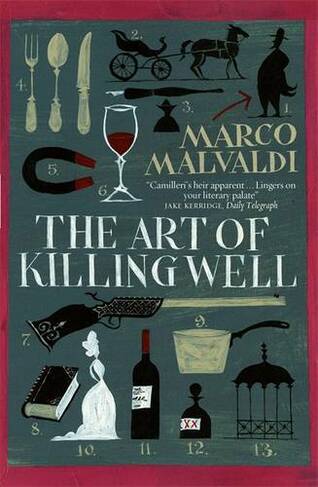 The Art of Killing Well

Nothing could please a chef more than a chance to learn the secrets of a Baron's castle kitchen. Having travelled the length and breadth of the country compiling his masterpiece, The Science of Cooking and The Art of Eating Well, Pellegrino Artusi relishes the prospect of a few quiet days and a boar hunt in the Tuscan hills. But his peace is short-lived. A body is found in the castle cellar, and the local inspector finds himself baffled by an eccentric array of aristocratic suspects. When the baron himself becomes the target of a second murder attempt, Artusi realises he may need to follow his infallible nose to help find the culprit. Marco Malvaldi serves up an irresistible dish spiced with mischief and intrigue, and sweetened with classical elegance and wit. His stroke of genius is to bring Italy's first cookery writer to life in this most entertaining of murder mysteries.

Marco Malvaldi was born in Pisa in 1974, and is both a crime novelist and a chemist. He is best known for his BarLume series set on the Tuscan Coast, and also for The Art of Killing Well, for which he was awarded both the Isola d'Elba Award and the Castiglioncello Prize. Howard Curtis is a prolific translator of Italian, French and Spanish fiction. He has won several awards, and has been twice nominated for the Independent Foreign Fiction Prize.