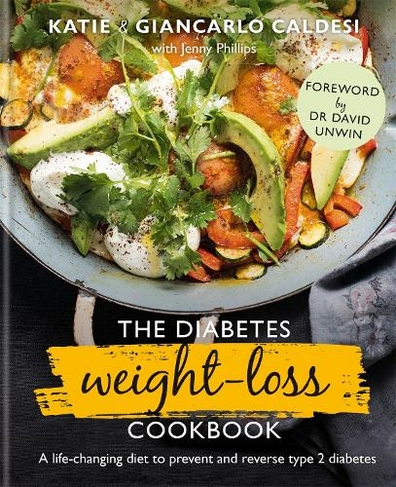 The Diabetes Weight-Loss Cookbook: A life-changing diet to prevent and reverse type 2 diabetes

As seen on ITV's Save Money: Lose Weight 'I've got this book and it's fantastic' Tom Watson, former Deputy Leader of the Labour Party 'an inspiring recipe book' Daily Mail 'The food has been filling and quite simple to make... I'm not missing anything. I am satisfied.' Sharon, tester on ITV's Save Money: Lose Weight 'I believe we have eaten our way into this epidemic of diabetes and obesity and that we can eat our way out of it' Dr David Unwin from his Foreword In 2012 Giancarlo Caldesi was diagnosed with type 2 diabetes. Since adopting a low-carb diet he has lost almost 4 stone and put his diabetes into remission - transforming his and his family's health. Working with nutritionist Jenny Phillips, Giancarlo and his wife Katie show you how to enjoy a low carb but not no-carb way of life with simple recipes using easy-to-source ingredients that will fill you up without fattening you up. Steak and Chips are still on the menu, as are delicious curries such as Butter Chicken and Spinach Paneer, even puddings like Hot Chocolate Pots or Peanut Butter & Jelly Cake. An initial diagnosis of diabetes can be shocking and the masses of information daunting, but Katie and Giancarlo share their personal experience of diabetes and weight loss to empower you to make your own informed decisions about food, without sacrificing any of the flavour.

Katie and Giancarlo Caldesi own London's Caffe Caldesi as well as Caldesi in Campagna in Bray. They co-authored Around The World in Salads and The Gentle Art of Preserving which was nominated for the Andre Simon Food Book Award and the Guild of Food Writers' Cookbook of the Year award. They have both appeared on Saturday Kitchen. Katie is also the author of The Italian Cookery Course. Giancarlo was diagnosed with type 2 diabetes in 2012. Since then he has lost nearly 4 stone and his diabetes is in remission after adopting a low-carb diet.