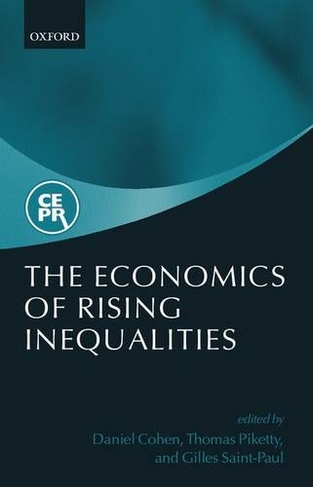 The Economics of Rising Inequalities

Also available on eBook for £22.55. Click here to purchase from Rakuten Kobo

This book is an in-depth discussion of rising inequalities in the western world. It explores the extent to which rising inequalities are the mechanical consequence of changes in economic fundamentals (such as changes in technological or demographic parameters), and to what extent they are the contingent consequences of country-specific and time-specific changes in institutions. Both the 'fundamentalist' view and the 'institutionalist' view have some relevance. For instance, the decline of traditional manufacturing employment since the 1970s has been associated in every developed country with a rise of labor-market inequality (the inequality of labor earnings within the working-age population has gone up in all countries), which lends support to the fundamentalist view. But, on the other hand, everybody agrees that institutional differences (minimum wage, collective bargaining, tax and transfer policy, etc.) between Continental European countries and Anglo-Saxon countries explain why disposable income inequality trajectories have been so different in those two groups of countries during the 1980s-90s, which lends support to the institutionalist view. The chapters in this volume show the strength of both views. Through empirical evidence and new theoretical insights the contributors argue that institutions always play a crucial role in shaping inequalities, and sometimes preventing them, but that inequalities across age, sex, and skills often recur. From Sweden to Spain and Portugal, from Italy to Japan and the USA, the volume explores the diversity of the interplay between market forces and institutions. numerous figures and tables

Daniel Cohen is Professor of Economics at the University of Paris-I (Pantheon-Sorbonne) and Ecole normale superieure. He was formerly co-director of the International Macroeconomy Programme and the Centre for Economic Policy Research, and has acted as a consultant to the World Bank and the IMF.; Thomas Piketty is Directeur d'etudes at the EHESS, Paris, and Research Fellow at CEPREMAP (Paris) and CEPR (London). Previous positions have included ResearchFellow at CNRS and Assistant Professor in the Economics Department at MIT. He is co-editor of the Journal of Public Economics.; Gilles Saint-Paul is Professor of Economics at the Universite des Sciences Sociales, Toulouse, France. He was previously a Researcher at DELTA, Paris (1990-7), Visiting Professor at MIT(Spring 1995), and Professor at the Universitat Pompeu Fabra, Barcelona (1997-2000). He has been a CEPR Research Fellow since 1991 and Programme Director for labour economics since 2001.