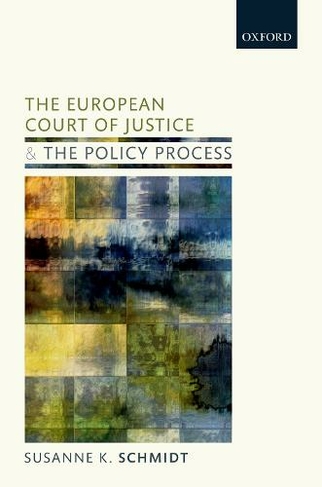 Also available on eBook for £58.67. Click here to purchase from Rakuten Kobo

The European Court of Justice is one of the most important actors in the process of European integration. Political science still struggles to understand its significance, with recent scholarship emphasizing how closely rulings reflect member states' preferences. This book argues that the implications of the supremacy and direct effect of the EU Treaty have still been overlooked. As it constitutionalizes an intergovernmental treaty, the European Union has a detailed set of policies inscribed into its constitution that are extensively shaped by the Court's case law. If rulings have constitutional status, their impact will be considerable, even if the Court only occasionally diverts from member states' preferences. By focusing on the four freedoms of goods, services, persons, and capital, as well as citizenship rights, the book analyses how the Court's development of case law has ascribed a broad meaning to these freedoms. The constitutional status of this case law constrains policymaking at the European and member-state levels. Different case studies show how major pieces of EU legislation partly codify case law. Judicialization is important in the EU. It also directly constrains member-state policies. Court rulings oriented towards individual disputes are difficult to translate into general policies-but if they have constitutional status they have to go through this process. Policy options are thereby withdrawn from majoritarian decision-making. As the Court cannot be overruled, short of a Treaty change, its case law casts a long shadow over policymaking in the European Union, undermining the legitimacy of this political order.

Susanne K. Schmidt is Professor of Political Science at the University of Bremen. She has published widely on questions of European integration, including the role of the Commission, competition and liberalization policies in the EU, and mutual recognition as a new mode of governance. The policy implications of the European Court of Justice's case law at the European and national levels are the current focus of her research. Her work has appeared in journals such asthe Journal of Public Policy, the Journal of European Public Policy, West European Politics, European Union Politics, the Journal of Comparative Policy Analysis, Public Administration, and German Politics. Her publications include The Power of the European Court of Justice (co-authored withR. Daniel Kelemen, Routledge, 2013) and Mutual Recognition as a New Mode of Governance (Routledge, 2008).