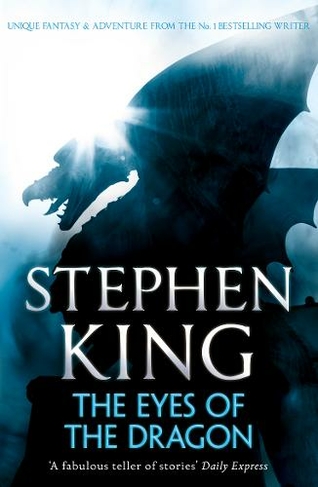 The Eyes of the Dragon

While evidence is gathered, and the land of Delain mourns, Flagg the King's magician, unscrupulous, greedy and powerful, plots. Soon the King's elder son, Peter, is imprisoned in the needle, the top of a high tower, for his father's murder. And Thomas inherits the throne. Only Peter knows the truth of his innocence, and the true evil that is Flagg. Only Peter can save Delain from the horror the magician has in store. He has a plan, but it is rife with danger. And if he fails, he won't get a second chance . . . A captivating tale of heroic adventure, of dragons and princes, of mysterious mice and men from the pen of the master storyteller.There is a reason why Stephen King is one of the bestselling writers in the world, ever. Described in the Daily Express as 'a fabulous teller of stories', Stephen King writes books that draw you in and are impossible to put down. The King is dead, murdered by an unusual poison. B&W integrated illustrations by David Palladini

Stephen King is the author of more than sixty books, all of them worldwide bestsellers. His recent work includes Sleeping Beauties (co-written with his son Owen King), the short story collection The Bazaar of Bad Dreams, the Bill Hodges trilogy End of Watch, Finders Keepers, and Mr. Mercedes (an Edgar Award winner for Best Novel, and shortlisted for the CWA Gold Dagger Award). Many of King's books have been turned into celebrated films, television series and streamed events including The Shawshank Redemption, Gerald's Game and It.King is the recipient of the 2014 National Medal of Arts and the 2003 National Book Foundation Medal for Distinguished Contribution to American Letters. He lives in Bangor, Maine, with his wife, novelist Tabitha King.