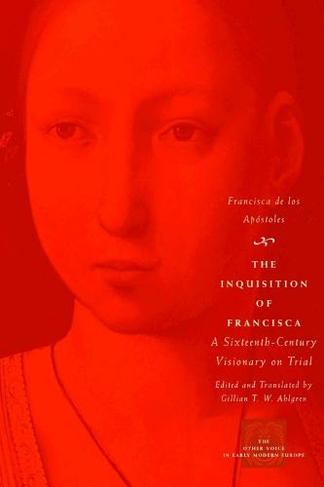 The Inquisition of Francisca A Sixteenth-century Visionary on Trial

Inspired by a series of visions, Francisca de los Apostoles (1539-after 1578) and her sister Isabella attempted in 1573 to organize a beaterio, a lay community of pious women devoted to the religious life, to offer prayers and penance for the reparation of human sins, especially those of corrupt clerics. But their efforts to minister to the poor of Toledo and to call for general ecclesiastical reform were met with resistance, first from local religious officials and, later, from the Spanish Inquisition. By early 1575, the Inquisitional tribunal in Toledo had received several statements denouncing Francisca from some of the very women she had tried to help, as well as from some of her financial and religious sponsors. Francisca was eventually arrested, imprisoned by the Inquisition, and investigated for religious fraud. This book contains what little is known about Francisca - the several letters she wrote as well as the transcript of her trial - and offers modern readers a perspective on the unique role and status of religious women in sixteenth-century Spain. Chronicling the drama of Francisca's interrogation and her spirited but ultimately unsuccessful defense, The Inquisition of Francisca - transcribed from more than three hundred folios and published for the first time in any language - will be a valuable resource for both specialists and students of the history and religion of Spain in the sixteenth century.