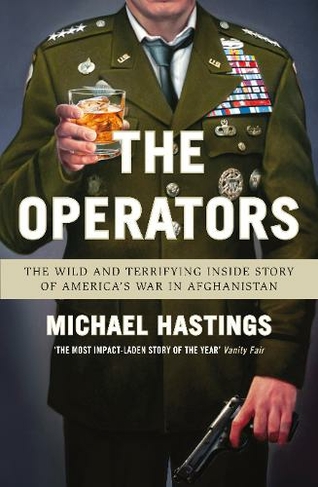 The Operators: The Wild and Terrifying Inside Story of America's War in Afghanistan

By Michael Hastings (Author)
Paperback
https://www.whsmith.co.uk/products/the-operators-the-wild-and-terrifying-inside-story-of-americas-war-in-/michael-hastings/paperback/9780753829387-12-000.html £8.19 rrp £9.99 Save £1.80 (18%)
GBP
Availability
In Stock
Free Delivery Available When You Spend £25 Or More
Details
Spend £25 on eligible products to receive free standard delivery to home or free next working day click and collect to store
Share

The inspiration for the upcoming movie WAR MACHINE, starring Brad Pitt, Tilda Swinton and Ben Kingsley (streaming on Netflix from 26 May). General Stanley McChrystal, the innovative commander of international and US forces in Afghanistan, was living large. Loyal staff liked to call him a 'rock star'. During a spring 2010 trip across Europe to garner additional Allied help for the war effort, McChrystal was accompanied by journalist Michael Hastings of ROLLING STONE. For days, Hastings looked on as McChrystal and his staff let off steam, partying and openly bashing the Obama administration for what they saw as a lack of leadership. When Hastings' piece appeared a few months later, it set off a political firestorm: McChrystal was ordered to Washington, where he was unceremoniously fired. In THE OPERATORS, Hastings gives us a shocking behind-the-scenes portrait of Allied military commanders, their high-stakes manoeuvres and often bitter bureaucratic in-fighting. He takes us on patrol missions in the Afghan hinterlands and to hotel bars where spies and expensive hookers participate in nation-building gone awry, drawing back the curtain on a hellish complexity and, he fears, an unwinnable war.

Michael Hastings was a reporter for BuzzFeed and contributing editor at Rolling Stone until his death in 2013. He regularly covered politics and international affairs, including the wars in Iraq, Afghanistan and Libya. In 2011, he received the George Polk Award in journalism for his Rolling Stone story, 'The Runaway General'.