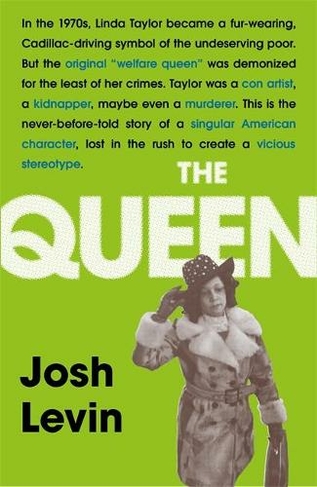 The Queen: The gripping true tale of a villain who changed history

By Josh Levin (Author)
Paperback
https://www.whsmith.co.uk/products/the-queen-the-gripping-true-tale-of-a-villain-who-changed-history/josh-levin/paperback/9781472266088-12-000.html £9.01 rrp £10.99 Save £1.98 (18%)
GBP
Availability
In Stock
Free Delivery Available When You Spend £25 Or More
Details
Spend £25 on eligible products to receive free standard delivery to home or free next working day click and collect to store
Share

*** WINNER OF THE NATIONAL CRITICS CIRCLE AWARD FOR BIOGRAPHY *** *** LONGLISTED FOR THE PEN/JACQUELINE BOGRAD WELD AWARD FOR BIOGRAPHY *** 'The Queen is an invaluable work of non-fiction' - David Grann, Sunday Times and New York Times bestselling author of Killers of the Flower Moon This is the gripping true tale of a villain who changed American history. In the 1970s, Linda Taylor became a fur-wearing, Cadillac-driving symbol of the undeserving poor - the original 'welfare queen'. In the press she was the ultimate template for this insidious stereotype; Ronald Reagan himself cited her criminal behaviour in his presidential campaign, turning public opinion firmly against state benefits and those who used them. But Taylor was demonized for the least of her crimes. She was a con artist, a thief, a kidnapper, maybe even a murderer - and certainly one of the most gifted and deranged criminals of modern times. The Queen is the never-before-told story of a beguilingly complex American character, lost in the rush to create a vicious stereotype. 'Anyone who knew welfare knew, I thought, that the welfare queen is a myth. Turns out she isn't' - Jamie Fisher, TLS 'Levin's brilliant exploration of the politics of welfare reform teaches an essential lesson. Where myths and stereotypes predominate, facts, logic and evidence lose out . . . Levin's story calls upon us to think harder. Gripping' Washington Post

Josh Levin is the editorial director of Slate and the host of the sports podcast Hang Up and Listen. He previously worked at the Washington City Paper and has written for Sports Illustrated, the Atlantic, GQ, and Play: The New York Times Sports Magazine. He was born and raised in New Orleans and is a graduate of Brown University. He lives in Washington, D.C.